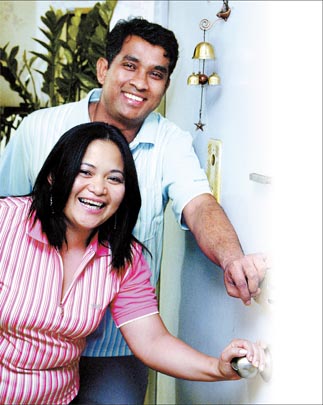 Korea’s expatriate population stood at a mere 49,000 in 1990. Last year, the number reached over 1 million, including people from 195 countries, according to the Justice Ministry.

Experts estimate that the country’s expatriate population could account for as much as 5 percent of the total population by 2020. With the rising foreign population, different types of families are emerging. Koreans marry foreigners and foreigners marry each other. Now some of these new Koreans are calling Korea home.

Judith Alegre Hernandez, 36, is from the Philippines and came to Korea in 1992. It was her love for a Korean man that brought her here.

At the time, marrying a Korean guaranteed Korean citizenship. In 1998, the 1948 law changed, and to get citizenship, you had to have been married for two years and pass an examination. 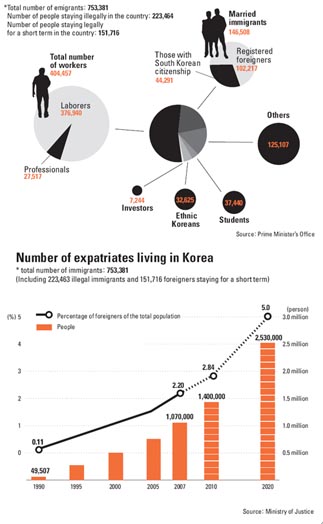 Since 2003, the examination has been replaced by an interview and screening by the Ministry of Justice.

In 1994, Hernandez gave birth to her first son, Hwang Ji-hun, and in November a daughter followed. When her husband suddenly died in 2004, Hernandez continued making a living by teaching English at a language institute.

During her grief she got closer to a friend of hers, Mohammad Mizanure Rahman, 36, from Bangladesh. In 2006 they married. In March this year, Rahman requested Korean citizenship and is now waiting to get approval.

The family lives together in a one- room rented apartment in Gyeonggi Province. The apartment consists of a living room, a small kitchen and a bathroom. The furnishings are Spartan ? there is only a TV and a computer. Hernandez is rotating between four language institutes and her husband works in a cell phone factory in Seongnam, Gyeonggi province.

The couple doesn’t have any complaints about living in Korea. They talk to each other in fluent Korean and their ringtones are Korean pop songs. Both think of themselves as Koreans, but not all perceive them that way.

“I think the younger generation has changed a lot, but the older generation still looks at us as different,” says Rahman. “Probably, it’s because they love Korea so much.”

Most Koreans think of their society as homogeneous, but Rahman thinks that the country should become a place where several ethnic groups can live together in harmony.

“Nowadays people can choose the country they want to live. We are Koreans now. We selected this country as the place to live. Korea is our home,” Hernandez says.

The couple are concerned about the future. ”When we have a child it will be Korean without a trace of Korean blood,” says Hernandez. “The child will look different from the rest as well. Will society accept it?”

Hernandez had to send the two children from her first marriage to their grandmother in the Philippines. She could not afford the expenses for education in Korea, and when she saw her children facing discrimination every day, the decision was easy.

Kim Hae-sung, the pastor who married the couple, is well known within the foreign community. He points out that Korean society has to prepare for these kind of marriages.

“Until now we had ethnic Korean Chinese marrying someone only to call in their real spouses after getting citizenship,” says Kim. “This couple is different.”

According to the Ministry of Justice, there are more cases in which a foreigner got married to a naturalized Korean and is awaiting approval for Korean citizenship.

Many foreigners living in Korea immediately help a fellow countryman. Often, someone who is married to a Korean becames a personal guiding light, bringing the experience of the Korean culture.

Shoaib Akhtar, 38, first came to Korea in 2000 from Pakistan to work in factories. Akhtar experienced many injuries, breaking his legs and arms through the hard work. In 2005, while being treated for a broken leg, he met Yang Jeong-do, 42, who was a nurse at the hospital.

In December 2006 they got married.

Akhtar’s Korean language skills helped him to get a job at the Seoul office of the Migrant Worker’s House, providing language aid to his compatriats. “The worst is when I hear that the companies try to fire them after they got a job-related injury,” says Akhtar.

Maria Asuncion Chavez, 36, is from the Philippines, and she married her Korean husband in 1995.

She is grateful to the efforts her husband and her mother-in-law made to make her feel comfortable in Korea. For example, her mother-in-law sent her to a Korean language institute in Jongno District, central Seoul, for three months.

Today, Cheavez is helping others in a similar situations through her work at the Seongnam office of Migrant Worker’s House. Often, women from the Philippines come to her house to learn about life in Korea.

Experts say that apart from the issue of adapting to the new country, there are many problems that need to be addressed.

“Foreign workers are exposed to violence from Korean workers and in some cases they have been denied payment for years,” Cho Ho-jin, an official of the Migrant Worker’s House, said.

Choi Hyeon-mo of the Korea Migrant Workers Human Rights Center points out that illegal workers are often subject to violence and exploitation by their Korean employers who take advantage of their illegal status. An estimated 200,000 illegal workers are currently in Korea, mostly working in factories.

Choi Hyeon-mo says that many foreign workers who first come legally on a short-term visa tend to stay beyond their allowed period.

“After they have adjusted themselves to Korean society they often feel tempted to continue living here,” says Choi.

It is also better for the employer to hire someone who speaks Korean. “To fire someone who knows Korean culture and the language and hire a new person means a great deal of investment of money and time,” says Woo Sam-yeol, an official of the Joint Committee of Migrants in Korea.

Kim Tae-myeong, a professor of law at Chonbuk National University, suggests that the government needs to find a way to call back skilled foreign workers who have been forced to leave the country after being discovered as illegal workers.