Love it or hate it: Antarctica gets under chef s skin

Love it or hate it: Antarctica gets under chef s skin 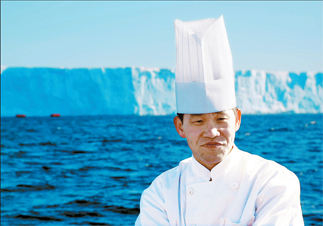 You have to wonder what the people working at King Sejong Station, a research base for the Korea Antarctic Research Program, eat every day. After all, it s 17 guys stationed in freezing weather all year round with no restaurants to speak of in the vicinity. And they re there to conduct research, not worry about what to eat for lunch.

Leave it to the designated chef to take care of that. He works for about a year and prepares three meals a day for the researchers, so that the scientists won t have to subsist on instant noodles and packaged kimchi.

He said the joy of eating means a great deal to the researchers who otherwise have little diversion at the station.

We ate at 7 a.m., noon and 6 p.m., and no one ever missed a meal, Lee said at his current workplace, a Japanese restaurant in Busan. Guys would walk through blizzards to make it to the meal on time.

Lee first worked at the station in 2005 and returned two years later. Before his first stint, he ran a restaurant with eight cooks and 250 seats.
How he ended up in the Antarctic is pure coincidence. 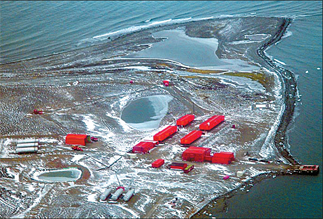 A base for the Korea Antarctic Research Program. [JoongAng Ilbo]

I had a cut on my hand in December 2004 and went to see Dr. Shin Jin-ho, one of our regulars at the time, Lee recalled. I found out he had been a physician at King Sejong Station. I asked him what it was and Shin started going off on all the great things about working in Antarctica.

Lee said Shin helped him prepare his application for the chef position. In May 2005, Lee got the job.

Though the Antarctic chef begins his stay in December, the real work starts in May. He has to prepare enough food to make it through a full year. Aside from 17 researchers, there are up to 40 visitors from December to February.

It s difficult to get new foodstuffs once we re at the station, Lee said. And we can t use the same ingredients every year. Chefs have different specialties and people stationed there all have different preferences.

But there is one constant: samgyeopsal (thin slices of pork belly) along with kimchi and soju. The high-calorie pork and the liquor keep the researchers warm and, because they re the symbol of a working man s dinner in Korea, warm at heart.

Lee said although he prepared foodstuffs literally in tons, it wasn t so difficult to store.
Antarctica is the biggest refrigerator in the world, Lee said with a smile.

So how does Lee handle the massive amounts of food? He said the station s medic works as an assistant in the kitchen since researchers are relatively healthy and leave the resident doctor with little work.

Lee said his biggest concern was not how to use all the items, but how to provide the most pleasant dining experience for his troops. He threw birthday parties and hosted occasional barbecues. Lee said he still gets calls from the men about his cooking.

They say, I miss your cooking, Lee said. Some guys say they get into arguments with their wives over what s on the dinner table.
A popular specialty in the Antarctic was patbingsu, a popular Korean dessert of ice shavings topped with sweetened red beans, fruit, small pieces of rice cake and jelly bits. Lee said he used icebergs to get ice shavings. Some researchers would take out the red beans, spread them on the fresh snow outside their base and eat with their hands because the snow in Antarctica was so pure. Lee also used his experience in Japanese cooking to prepare sushi, using fish caught for research purposes.

About four times a year, researchers catch assorted fish to check for any metal pollution in them. But they only examined the fish intestines, leaving Lee to prepare sushi with the rest.

Sushi from those Antarctic fish is outstanding, Lee gushed. Perhaps it s due to the cold water, but the fish is really chewy. I d never tasted anything quite like it.

Lee said he would enjoy working there for another year. Chefs aren t allowed to work for two consecutive years, meaning the earliest he can have another crack at the job is in 2009. In his first stint, it took Lee 10 days just to get to the base. He had problems adjusting to the new and unfamiliar surroundings.

He also missed his two sons, Geon-hyuk, 7, and Geon-han, 5. But as soon as he came home, Lee applied for his second tour of duty.
For now, he is busy learning types of cuisine so he will be able to serve up a wider variety of food if he gets another call to the chilly outpost.

The air is so fresh and crisp there, Lee said. I once skied there. And to see the beautiful icebergs and all, there s no experience quite like it.
He said those who have been to Antarctica often fall into two categories: Those who swear they will never return and others who dream of the day they go back.
Lee belongs to the latter he s one chef who has been bitten by the Antarctic bug.