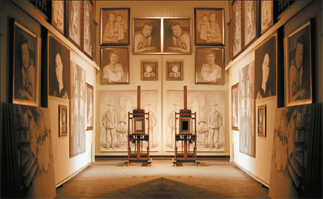 In the Kukje Gallery in Sogyeokdong, central Seoul, a painting of fashion designer Nora Noh, 80, faces a painting of Dowager Viscountess Rothermere, 58. The two distinctive women are the subjects of Cho’s latest solo exhibition, “Re-collection,” which runs until July 5.

“The display of the two different women is a historical homage,” Cho said. Though Noh and Rothermere lived in the same time period ? the mid- to late-20th century ? the two led very different lifestyles.

“While Noh pursued a Western lifestyle in Korea, Rothermere searched for Asian values in the West,” Cho said. 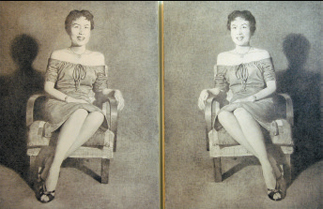 A symmetrical portrait of fashion designer Nora Noh by Cho Duck-hyun. Provided by the organizer

Cho, a professor of fine arts at Ewha Womans University, came across Noh in 2006 through biographical essays she serialized in the Joong-Ang Ilbo. He learned that after divorcing her husband, she changed her name from Noh Myung-ja, taking the name of the female protagonist in Henrik Ibsen’s “A Doll’s House” (1879), a play that questions accepted marital mores.

Noh, who went to the United States to study fashion design in 1947, features in black-and-white portraits that decorate the gallery’s main hall. Less than a decade later she held Korea’s first fashion show in Seoul’s Bando Hotel. In it, she introduced pantaloons and miniskirts to the country, which were shocking items here at the time.

“I wanted to do a retrospective into the life of Korea’s legendary fashion designer,” Cho said.

The second floor of the gallery is dedicated to Rothermere, or Lee Jeong-shun by her Korean name. The Japanese-born Korean, also known by the first name Maiko, married English media proprietor Viscount Rothermere (1925-1998), after a long stint as his extramarital mistress, in 1993.

The display features a mirror-lined box in which the reflections of seven lotus sculptures multiply off into infinity. “The lotus sculpture is a metaphor symbolizing the Korean emotional spirit residing in Rothermere’s heart,” said Cho, who first encountered her in London in 2006 when he opened a group exhibit.

Although her husband never lived in Korea, in 1998 Rothermere, a current patron of the arts, buried half of his ashes in Baengnyeon Temple in Muju, North Jeolla, where her mother was buried, and where she intends to be buried when she dies.