A woman’s dance with the North Korean regime

A woman’s dance with the North Korean regime 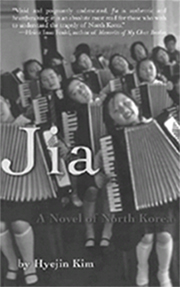 “Jia - A Novel of North Korea” by Hyejin Kim, tells the story of a woman’s relationship with North Korea’s authoritarian state.
Jia begins her life in a community of outcasts who are forced to work in coal mines because her father refused to toe the state line. He was taken away and charged with political treason before she was born, never to be seen again.
She has a happy childhood despite her harsh conditions, including the loss of her mother in childbirth, but when her paternal grandparents, who are raising her, hatch a plan to send her to Pyongyang to be with her mother’s parents, the state plays a role in the well-connected couple’s decision to reject her.
Her mother’s father, who is a general, fears any acknowledged link to his daughter’s rebellious husband will reflect poorly on him. Thus Jia, at the age of 7, lands in an orphanage.
She learns to dance there and is recognized by a dance teacher who also taught her mother when she was a girl. The teacher’s character is an example of someone willing to pull the wool over the state’s eyes for the memory of a favorite student.
In a position of some authority, teacher Song recruits Jia to dance in a World Youth Festival and then as an apprentice with a troop of professional dancers.
Jia is happy for a time before the state rears its ugly head again and snatches away her best friend and mentor, who had become ensnared in a sex and blackmail ring that included a corrupt military guard and unsuspecting foreign men.
As famine descends on North Korea in the mid-1990s, Jia’s problems with the authorities deepen. Her steady boyfriend, Seunggyu, who is a soldier and knows nothing of her past, complains about having to bury the bodies of people killed in floods in the nation’s mining communities.
Jia argues that people in mining communities are human, too, but Seunggyu’s ties to the state run too deep for him to see them as anything but “trash, reactionary elements.”

“They are like zombies,” he says. “They don’t think, they just walk and eat.”
As their plans to marry begin to take shape, Seunggyu presses her to introduce him to her family, and she is forced to reveal her past. He breaks off their plans to marry and threatens to denounce her. Rather than appeal to him for mercy, Jia decides the time is right to cross the border into China.
Once in China, the North Korean regime takes a more distant if still threatening role, and Jia has to survive being sold into the sex trade, being picked up by the Chinese police who want to send her back to North Korea and adapting to life in her new country.
Kim tells a compelling story, even if it does have some flaws. The protagonist goes through some meteoric changes with no transition to speak of.
The story glosses over nine years of her life in close to as many pages. This interrupts the reader’s relationship with Jia, so we end up not knowing her nearly as well at the end of the story as we did when she was a child.
In the forward, the author writes that Jia’s experiences and character are based on amalgam of people she spoke with when researching her book in China.
Unfortunately, this shows in the logical disconnect between her experiences. She goes from being beaten for challenging the lewdness of a patron at a singing room to being saved by a wealthy entrepreneur whose father was Korean.
It’s not that these things couldn’t happen, but the story loses its direction at the end.
That being said, characters who lose children to starvation, undergo torture after being caught defecting and live in caves in China breaks your heart and provides what seems like an authentic account of life in North Korea.