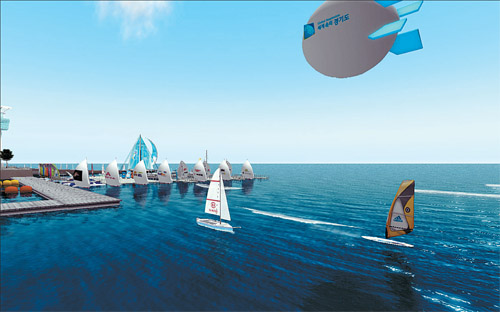 Cast aside the mooring ropes and hoist the mainsail for Jeongok Marina in Hwaseong City, Gyeonggi Province, which is hosting the Korea International Boat Show and Korea Match Cup.

The Korea Match Cup is the third stop on the nine-leg World Match Racing Tour this year. The leading professional sailing series began in Brazil in April and is set to finish in Malaysia during December.

The five-day boat show/racing match at Jeongok Marina gives visitors a chance to board yachts and experience life on the seas. For those who prefer to watch, there is a newly constructed 500-seat spectators’ area where you can view the racing.

They include the United Kingdom’s premier yacht builder Sunseeker, Beneteau from France, Germany’s Bavaria and Ferretti from Italy.

The display features all manner of boats, from a 20-meter luxury yacht worth over 3 billion won ($2.93 million) to dinghies and small racing yachts used in the Olympics.

In the Korea Match Cup, the world’s top 12 sailing teams are competing for 300 million won in prize money, the richest leg of this year’s World Match Racing Tour.

While previous racing matches in Korea took place out at sea, participants at the Korea Match Cup compete just offshore, providing an exciting panorama for spectators in the newly built stadium.

The tournament is being broadcast in 155 countries worldwide via television and the Internet. 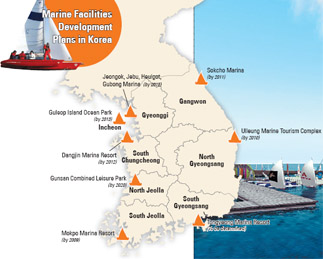 “We hope to put Gyeonggi on the world map of marine leisure, making it a future area of growth,” said Kim Moon-soo, the governor of Gyeonggi Province.

Kim believes yachts will be the automobiles of the future.

In April, Kim led a delegation of politicians, business executives and officials from the Korea Trade Investment Promotion Agency on a PR exercise for the boat show around Australia and New Zealand.

The global market for recreational boats like yachts is estimated to be around 48 trillion won. Together with the marine leisure businesses, the industry is worth about 100 trillion won. 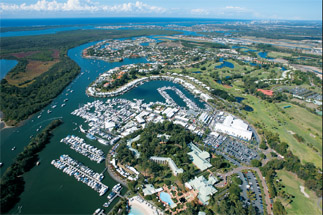 But it is debatable whether related facilities and equipment will improve fast enough to meet this accelerated demand.

On Korea’s south coast, Busan, Tongyeong and Jinhae marinas accommodate around 1,000 boats. But there are hardly any other major marinas elsewhere in the country.

Kotra Executive Graeme Worthington said during April’s promotion events that forecasts indicate that marine development in Korea is likely to boom within the next five to 10 years with help from the Korean government and foreign investment.

A number of local administrative governments are jumping on the bandwagon. There are about 38 marina projects under way around the country. But not many have drawn up specific blueprints. Most are uncertain where they will acquire the necessary funds.

Gyeonggi Province looks to be ahead of the competition. It plans to spend more than 1 trillion won by 2020 on a marine tourism and leisure complex. The ongoing Korea International Boat Show and the Korea Match Cup are part of an effort to secure the budget for the envisioned complex. Organizers anticipate the gathering of businesses, investors and buyers at the events will lead to a number of lucrative deals.

By 2015, Gyeonggi Province plans to build a marina cluster at the ports of Jeongok, Jebu, Heulgot and Gubong where 1,100 yachts can dock. It is also considering setting up a boat industry complex on reclaimed farmland in the Sihwa area in the city of Siheung.

“Automobile engines are used for small-sized leisure boats and a lot of other IT technologies apply to related electronic facilities,” said Choi Hyeong-guk, a director of the boat show. Gyeonggi houses the research and development centers of some leading auto and IT companies in Korea including the Hyundai-Kia Automotive Group, LG Display and Hynix Semiconductor.

“If we use these resources, we should be able to take the boat industry to a world-class level,” Choi said.

Danjin County in South Chungcheong Province also hopes to become a hub for marine leisure. It’s close to a metropolitan area as well as Anmyeon Island and the National Marine Park. Its vicinity to the Chinese coast also presents opportunities.

Officials in Danjin plan to invest about 500 billion won by 2012 on a marina that can accommodate 1,500 boats. If all goes as planned, it will be the biggest in Korea.

Besides anchorage facilities, the plan is to build leisure facilities like a hotel, aquarium, shopping center and water park. Construction should get under way in the latter half of next year at the latest.

“It was difficult to get government support, mainly because there weren’t many laws about marina development,” said Lee Il-sun, head of the Agriculture and Marine Department at the Danjin District Office. “We are certain that the planned marina will bring economic benefits to our community.”

Tongyeong in South Gyeongsang Province, which houses the nation’s second largest marine tourism resort, is also aspiring to get a boost in the business. The flux and reflux of the tides off the southern coast are not as wide as on the western coast, and the waves are also smaller, making it more suitable for water sports.

Recognizing its potential, Kumho Asiana Group built a mooring facility for 50 boats at the port of Donam in 1994. Tongyeong also hosted the second Admiral Yi Sun-shin Cup International Yacht Race from May 9 to 11 in which a total of 80 ships from 12 countries participated.

Officials in Tong-yeong have earmarked 20 billion won to build more anchorage facilities to accommodate an additional 250 boats. They also plan to construct a yacht park and spectators’ deck.

But experts voice caution on the booming marine development. First and foremost, they call for a centralized, nationwide survey of planned marine projects.

Without a comprehensive blueprint and policies from the central government, the projects could be no more than just a “midsummer night’s dream,” experts warn.

“Considering the pace of the development of marine leisure industry, there should be no more than 10 marinas nationwide,” said Ji Sam-eop, a marine sports industry professor at Pukyong National University in Busan.

“It will take at least 20 years for Korea’s marine sports industry to be on par with those of advanced countries. At this point, Korea should focus on building just a few key, shared marinas with the central government funding half the budget.”

Others argue, however, that different regions should develop their own marinas with resources and characteristics unique to them. “You don’t necessarily have to dock your yacht in certain marinas,” said Shin Jong-gye, a professor of naval architecture and ocean engineering department at Seoul National University.

“You must develop a marina that reflects the region’s characteristics and then form a network among marinas in different regions,” Shin said.

Kim Cheon-jung, who teaches tourism management at Yong-In University, agrees. “Developing cookie-cutter marinas won’t give us the competitive edge we need,” Kim said. “Unless we do it right from the start, we will always trail behind advanced marine facilities in the United States and the United Kingdom.”

Experts also point to the holy trinity in marine leisure business: facilities, marinas and the service industry. “It is crucial that these three businesses work in sync with one another. So there should be an environment in which small- to medium-sized companies can actively invest and participate,” Shin said.