Get on your bike and ride

Get on your bike and ride 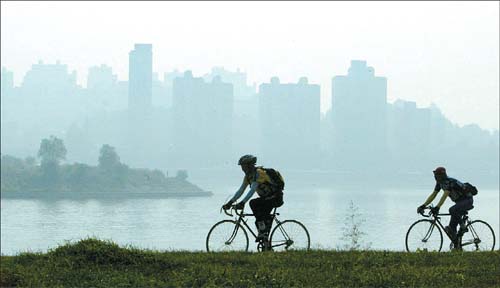 Seoul boasts a network of cycle paths alongside the Han River. 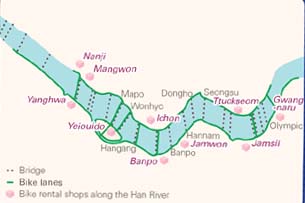 “This must be the most exotic place in Seoul,” said my friend Hyun-jung, as she stretched out her arms while standing on a riverside walkway south of the Han River.

I have heard such comments before. When people describe Seoul as “exotic,” they are generally referring to the relaxing and peaceful aspects of the Han River amid the bustling city. Otherwise, the bustling city of 12 million where more than 70,000 construction workers tear down old buildings day and night to create fancier edifices is rarely referred to in such exalted terms.

My friend had a point. Taking a break from her studies at Cornell, she was spending a year in her Korean hometown. She hadn’t been too enthusiastic about going for a walk along the banks of the Han River, but she gasped as she first caught a glimpse of the giant blue river before her.

Far left: Cyclists usually wear protective gear on the roads of Seoul.Left: Along the quieter paths beside the Han River, bikers escape the city. [JoongAng Ilbo]

The waterway appeared at the end of the tunnel, known locally as tokki gul, or the rabbit’s burrow, that leads to the banks of the Han River from the apartment complexes in Banpo-dong, southern Seoul. The green plots, outdoor swimming pool, tennis courts and wooden paths there weren’t what she was expecting.

Previously, she’d only seen the river when she was crossing the bridge from Seongu to Ttukseom Station on subway line No. 2.

But the real charm of this riverbank region lies with the small bike paths that worm alongside the city’s river. These paths have kept me keen on cycling in a city that is hardly bicycle friendly.

Bicycling on the streets of Seoul Some may scoff, and it’s true that Korea still has a long way to go before it can enjoy a reputation as a safe place to cycle.

Most urban bicycle lanes are simply the outer edge of the pavement. In Hannam-dong, which lies on the northern shores of the Han River, the sidewalks are divided into two by a blue line - people are expected to walk inside the blue line, cyclists on the other side.

In Yongsan District, where bicycle lanes are more noticeable, distinguished by bricks instead of asphalt, you are likely to run into street lamps, garbage bins and trees in the bike lanes, forcing riders to come to a sudden halt.

But, surprisingly, the cycle lanes thrusting out from the Han River banks stretch out over 60 kilometers (37.3 miles) downtown. They weave alongside the smaller streams that branch out from the grand Han River, creating some 360 kilometers of flat, web-like paths. And here there are no cars or trash cans.

These lanes lead safely across several major bridges in Seoul. Considering the heavy traffic conditions here, sometimes pedaling your two-wheeler along these lanes from Gangnam to City Hall in the north can save time.

But if you plan on crossing the bridge, you should consider getting the necessary gear to protect your nose, mouth and ears from car exhaust fumes as well as pesky black flies.

However, none of my colleagues were wearing protective gear when I met them for a bicycle trip along the Han River the other day, although the city recommends you to wear at least a helmet.

Those who did not bring their own bicycles could rent one from one of the 12 zones in the riverside walks. The city collectively calls these zones Hangang Park, although they are sometimes much smaller than you would expect of a typical park. 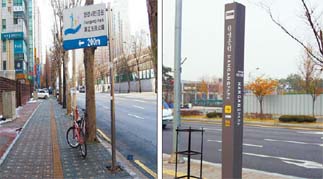 From left to right: A current sign to Hangang Park, and one of the new signs. Provided by Seoul City Government

One nice thing about touring Korea by bicycle is that as the country is so compact and possesses many different kinds of tourist sites, you’re bound to experience a variety of different sights and sounds.

The lane that goes under Wonhyo Bridge near Yeouido lets riders fly through fields of flowers filled with wild mustard. When using the lane near Banpo Bridge, you’ll see a yacht club and a posh restaurant called Fradia, which was built on a ship docked near the riverbank. I’ve heard people exclaim “It’s so exotic!” at least 17 times when I’ve brought them here.

Among the restaurants and cafes along the river, there is also a Buddhist temple floating near the dock on the other side of the river in the north closer to Eunpyeong District.

Getting closer to Seongsu Bridge, the lane immediately narrows and runs over rocks that separate you from the river. One can easily imagine that you are driving in a convertible along a beach highway. My colleague Soo-mee said she even felt a refreshing salty breeze as she was crossing the bridge.

Nam Gi-ho, known as “Nozzang,” which means “the grandpa rules” in Korean, helps organize a Web-based gathering for regular riders who are more serious about cycling (http://cafe.naver.com/bikecity.cafe). Nam dresses top to tail in black whenever he hits the tracks: cycling shirt, pants and matching gloves. Since he started cycling four years ago, he claims he’s lost 28 kilograms (61 pounds), according to his Web site.

It’s a story to believe. I tried commuting the 40 kilometers between my office and home for about two weeks. I lost a kilogram.

But riding to work is only a pleasure if it’s by choice. If you’re forced to get on your bike and ride to the office, you could feel resentful. Some workers have donned the lycra due to skyrocketing oil costs.

In Changwon, South Gyeongsang, 23 percent of civic workers are cycling to work, the city said. In Daegu, a special two-kilometer road is being built where public servants who don’t know how to ride a bike can learn.

By the end of our cycling trip, my friend Hyun-jung was a new convert to the cycling opportunities that Hangang Park has to offer.

“Next time I’ll bring my own bike,” she said as we pedaled off home.

Seoul looks to the signs of the times

The capital is getting ready to upgrade its image again, this time by revamping the street signs for the Han River.

The city government is calling the project the Han River Renaissance and aims to improve the giant river that runs through the nation’s capital and the area around its banks. It’s part of a push to make the city greener and cleaner.

Part of the plan is to replace 2,777 street signs, revamp facilities along the river and establish natural wetlands.

By September 2009, you should see clearer street signs leading you to the nearest Han River Park or to one of 12 riverside walks.

The signs will be in a unified design and size, installed in places that are easy to see. The old signs were often hidden behind newly erected buildings and in many cases the lettering had become too faint to read.

Information on the signs will be written in both Korean and English for the increasing number of non-Koreans visiting the parks near the Han River.

As of May, the number of expatriates that visited the river parks reached 43,788 this year, according to the Seoul city government.

The city is also planning to remove the concrete bank protection that runs 62 kilometers (38 miles) along the river and replace it with ecological parks and natural wetlands. The cost is supposed to reach 94.1 billion won ($91.37 million) when the project is finished by 2010.

As for Yeouido, more bicycle lanes and riverside walks will be created by next October, which will cost the city government 36.8 billion won.

The improvements might be great news for many Seoul residents, but street vendors are up in arms and have organized their own protests in front of Seoul City Hall.

The Renaissance project includes pushing out vendors who sell street snacks near the riverside walkways.

But Oh Se-hoon, the mayor of Seoul, is determined to let the project continue.

“The city never regulated them without a cause,” said Oh in an interview with a local paper.

He explained that what the city wants is to provide pedestrians with more room to walk and to take care of sanitary problems and food safety.

“Seoul wants to improve its city competitiveness in design and safety,” he said.