Fair trade comes at a price

Fair trade comes at a price 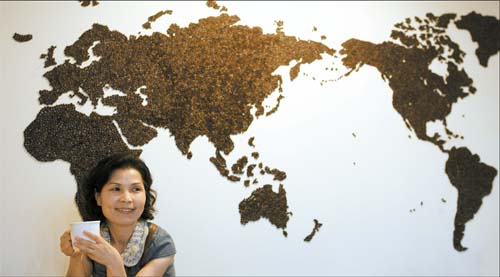 A world map patched together with free trade coffee beans at Beautiful Cafe. By Jeong Chi-ho

When Yoo Jong-guk opened a cafe in Seoul’s Buam-dong two years ago, he did two things that were highly unusual: He decided not to put up a signboard in front of his store and he only used coffee brewed from beans by Beautiful Coffee, a local foundation that imports coffee beans from Nepal and Chile through a fair trade deal.
By giving up a sign, Yoo wanted to maintain the peaceful environment of his neighborhood, and the fair trade deal built a base for a unique crowd of socially conscientious consumers in the area who cherish principle over fashion.
Even without the sign, the cafe quickly became the area’s hip hideout, nicknamed “yellow house” by patrons, after its painted door frames.

“I wanted to show people that some businesses embrace values more than profits,” says Yoo. 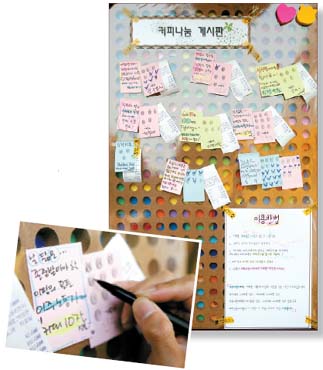 Trust, indeed, is the principle value of fair trade, a term that rose to prominence here only in recent years as richer countries began to set up deals with so-called third world nations that gave workers there more power over trading conditions.

The campaign for fair trade originally began in the 1940s when charity groups in the United States and Europe began selling products made in Latin America, Asia and Africa. Fair trade helped to improve workers’ security and welfare and helped tackle ethical issues in the global economy such as child labor and low wages.

In European countries, fair trade groups have already made their mark.

In England, fair trade coffee accounts for 30 percent of the market. One in five bananas sold in Switzerland is labeled fair trade, according to one news source.

Fair trade products in Korea so far include chocolates, clothes, tea, sugar, footballs and coffee. But coffee tends to take up the largest portion of fair trade items, as in Europe and the United States. 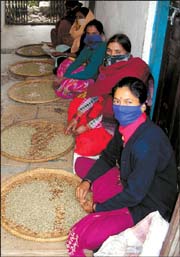 Women work on a coffee plantation in Nepal. Provided by Beautiful Coffee

Their product was called Gift from the Himalayas, which used coffee beans imported from Gulmi, a village east of Kathmandu in western Nepal. The beans were bought, roasted and packaged through donations by industry professionals affiliated with the foundation. Then earlier this year, the company added Gift from the Andes to their list, with coffee beans from Peru.

A few other local groups have also set up deals with underdeveloped nations. The YMCA in Seoul is currently selling coffee beans from East Timor, fair trade certified under the name Peace Coffee. Ulim imports soccer balls from Pakistan. Dure Coop, a local distributor that mainly sells organic produce, imports sugar from Negros Island in the Philippines where half of the country’s sugar production is harvested every year.

Local fair trade groups assist producers through trust regulations: They import a set amount of produce as promised even if it means a loss. The groups also offer advance payment regardless of the producers’ harvests, ensuring stability. The money goes to building local infrastructure. 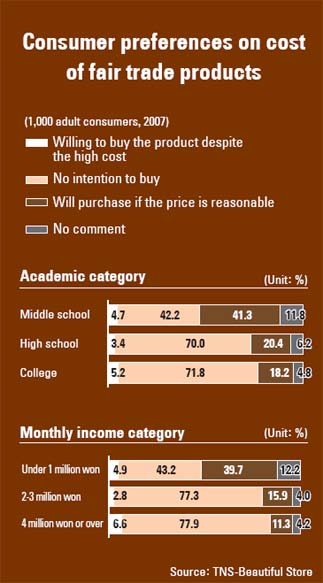 So far, the outcome has been slight for most fair trade groups here. “Inevitably consumers have to be willing to invest for the social good,” says Park Chang-sun, the representative of Ulim who set up his company in 2006 after he made a documentary on fair trade for EBS. “But the mind-set isn’t really there yet.”

Ulim currently imports footballs from Sialkot, a factory town in Pakistan that produces 70 percent of the world’s footballs. The village once attracted notoriety when news spread that some global sports companies were hiring children to work 14 hours a day. 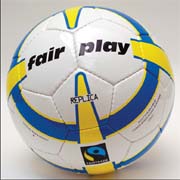 A fair trade football by Vision Technology, a Palestinian producer for soccer balls, distributed to Korea through Ulim. Provided by Ulim

In return, the group helped producers in Gulmi to build a library, hire local teachers and buy trucks to transport the imports. In a cooperative district made up of 835 families who mostly make a living as banana and coffee farmers for 40 rupees (500 won, $0.48) a day, the trade deals with Korea have brought renewed hope.

“When we talked to them, they said many of them have family members working in Korea,” says Han Su-jeong, a senior official at Beautiful Coffee. “It took us time to develop this much trust. After all, we’re dealing with farmers and workers who belong to some of the lowest [economic groups] in their country.”

For other groups, though, fair trade deals exceed humanitarian concerns. Dure Cooperatives, which specializes in providing organic produce, signed a deal with Filipino producers in March 2006. If certain products had to come from outside the country, they wanted to choose their own producers.

The group arranges for members to visit plantations on Negros Island every year. Since 2006, the island has set up medical clinics and purchased farming machinery.

While fair trade groups are slowly gaining public recognition here, some worry that fair trade labels could end up being an elitist signature.

Currently, 200 grams of ground beans at Beautiful Coffee costs 10,000 won, about one-third cheaper than beans sold in other coffee franchises.

Jin Seong-won, an official at Beautiful Coffee, says even though its prices are cheaper than major coffee franchises who, Jin says, try to improve profit margins by raising prices, the company covers transport costs and gives the producers a share.

A recent survey by the foundation and TNS, a local research firm, is telling. It said up to 70 percent of respondents had no intention of buying the company’s products if the fair trade labels were more expensive than the price marked now. Only 4.5 percent said they would buy fair trade items even if they cost more. The number shows that fair trade labels are unlikely to survive a price war.

“In the end, coffee is coffee,” says Han of Beautiful Coffee. “Most people just want to buy products that taste good and are affordable. It’s not like Europe where many people savor the principle.”