The restaurant that served up independence

The restaurant that served up independence 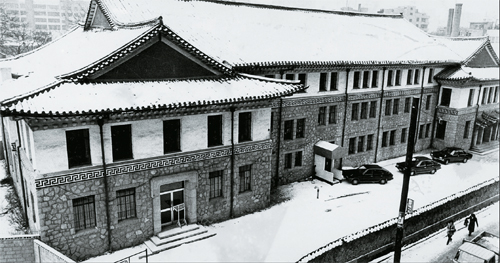 
As you enter the Taiwha Building in Insa-dong, central Seoul, you can’t miss a painting of a group of independence fighters.

Among those depicted are Buddhist monk and poet Han Yong-un and Cheondo religious leader Sohn Byung-hee.

They are locked in thought, clearly discussing matters of grave importance. Spread before them are copies of Korea’s declaration of independence from Japan’s colonial rule.

Below the painting is the following inscription: “On March 1, 1919, at noon, nationalists gathered here and declared Joseon’s independence and the freedom of its people. The movement ignited here and spread nationwide.”

The independence fighters signed Korea’s Declaration of Independence at Taiwhagwan, the Korean name of present-day Taiwha Building, before heading out to print and distribute copies of the declaration near Pagoda Park.

Taiwhagwan was a restaurant at the time specializing in court cuisine.

The 12-story Taiwha Building of today is owned by the Taiwha Foundation, a social welfare organization.

The independence fighters had gathered at Taiwhagwan to hear Han read out the declaration.

They had invited representatives of the Japanese colonial government to hear their words.

The Japanese police arrested the Koreans after they made the declaration.

As Han read out the historic document, an estimated 2 million Koreans were swarming around Pagoda Park a few blocks away in anticipation of the announcement.

“Though there are no architectural remains [of Taiwhagwan], the building is more than significant because of the way it shaped modern Korea,” said Cho Gi-won, the administrating director of the Taiwha Foundation.

There is only a stone tablet to mark the spot.

The site itself dates back to the mid-16th century. King Jungjong, who reigned from 1506-1544, had his second palace built here.

It was called Sunhwa Palace.

Lee is remembered as a traitor because he signed the Japan-Korea Annexation Treaty in 1910 that led to Japan’s colonization of Korea.

“He [Lee] remodeled the palace into a garden cottage where many pro-Japanese figures came to relax,” Cho said, according to his research.

One day after Japan had annexed Korea, according to Cho, lightning struck a tree in the cottage garden.

People whispered that the bolt of lightning was punishment by God to people who had betrayed the country. 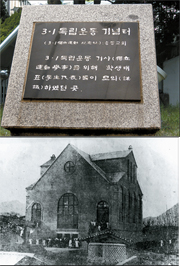 Top: A stone marker indicates where discussions took place prior to the declaration of Korean independence. Bottom: Seung Dong Church as it looked in the early part of the 20th century. By Lee Eun-joo

After the incident, Lee sold the property in 1918 to Ahn Soon-hwan, owner of a restaurant, Myungwolgwan, which burned down.

Ahn decided to turn his new acquisition into the second branch of his restaurant, and he called it Taiwhagwan.

The new restaurant employed gisaeng, Korean female entertainers who danced and sang for customers. But it was not simply a den for fun and games.

“It was also a secret gathering place for patriots to discuss the independence campaign,” Cho said. This is why the declaration was signed at the restaurant.

“It was a familiar location for those patriots,” Cho said.

What’s interesting is the irony: The land that was owned by a man many Koreans still consider a traitor, Lee Wan-yong, became the site of one of the most significant acts in Korea’s fight for independence, Choi points out.

According to “The History of Taiwha,” written by Lee Deok-joo, a Methodist pastor, American missionary Mary Myers bought the building in 1921 from Ahn.

Myers had the building renovated into a modern two-story hanok, a traditional Korean building, made of stone.

Many patriots were tortured there ? another touch of irony in the history of the site where independence was declared.

“Taiwhagwan survived many things during the Japanese colonial period,” said Shin Deok-gyun, who works at the present-day building at the site as a security guard.

“It is the foundation of the March 1st Movement as well as Korea’s other modern social welfare movements.”

“But there is nothing tangible left, just a cornerstone,” Shin said with more than a hint of disappointment.

However, students and visitors from overseas, including some Japanese, visit the site during weekends.

“The site is a living witness to Korea’s modern history. It bore the weight of Japanese rule and postwar poverty,” Shin said.

If you step out from the building and head toward nearby Pagoda Park, you can find another site that had a role in Korea’s independence movement: the Seung Dong Presbyterian Church.

The church was designated Intangible Cultural Property No. 130 by the Seoul metropolitan government.

The red brick building was built by Samuel Moore, a Presbyterian minister, in 1893.

“It is another site that served as a foundation of the March 1st Movement,” Han said.

Student leaders and church members gathered in the basement days before the March 1st Movement to discuss the declaration of independence.

Currently, the church is under reconstruction.

After designating the church as a cultural asset in 2004, the Seoul city government decided to restore some parts of the building, including its tiles and walls. Restoration will be completed later this year.

Four days after the March 1st Movement, Kim, along with other students, led another independence protest near Seoul Station and Namdaemun in central Seoul.

“Some pastors including Cha Sang-jin [of Seung Dong Church] also led protests,” Han said. Many were arrested for their troubles.

The role the church played in the independence movement is largely forgotten today, Han said with a sigh.

“Yet it was the center of patriotic movements,” he said.