The healing power of dogs

The healing power of dogs 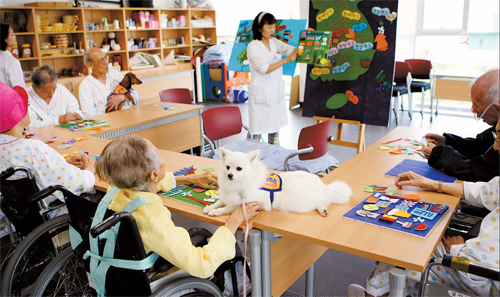 Sim Jae-cheon, 94, doesn’t recognize his children. On bad days, he finds it hard to explain who he is, where he is and where he came from.

Sim has been suffering from dementia since 2004. He was hospitalized in 2006.

But for the past 12 months, he has been able to recognize one of his friends not just his name, but also his age and his hometown. That pal is his four-legged furry friend, Namoo.

Namoo is a four-year-old Dachshund, a live-in therapy dog at Bobath Memorial Hospital in Bundang District, Gyeonggi Province, about a one-hour drive from Seoul.

Every Monday and Thursday, about 10 people with dementia gather in a large therapy room and play with Namoo and Gongju, a Maltese, another therapy dog at the hospital.

Before the session, Namoo and Gongju were like any other dogs. Noticing a stranger, me, they started to bark, jump around, prick up their ears and wag their tails.

But as soon as the social workers put on their jackets, the dogs calmed down. It was as if they knew it was time to get to work and meet their patients.

“It’s amazing how they distinguish patients from non-patients,” said Kim Tae-yeon, manager of medical social workers at Bobath. “When they’re with us, they bark and play pranks. But around patients, they become quiet, careful, extremely gentle and well-behaved. They recognize them [the patients] from their smell, robes and wheelchairs.” 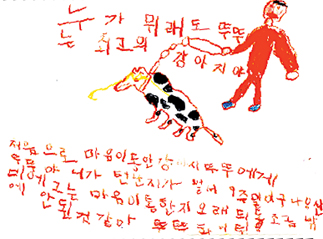 “I’m so happy to meet you,” writes a patient at Seoul National University Hospital to his therapy dog. Provided by Korea Animal Assisted Therapy Research Center

Bobath Memorial Hospital is currently the only medical facility in Korea that runs animal-assisted therapy sessions on a regular and long-term basis. This form of therapy uses pet animals in healing and rehabilitation of physically or psychological-ill individuals.

“The therapy dogs from Samsung used to visit us for sessions,” Kim said. “We found it very satisfactory, so we decided to adopt the dogs.”

Does this kind of therapy actually work?

“It’s difficult to present tangible proof that patients improve, because with dementia, conditions vary daily. But through anecdotal evidence like Sim’s story, we remain confident. Our next step will be to develop sessions for patients with other illnesses,” Kim said. 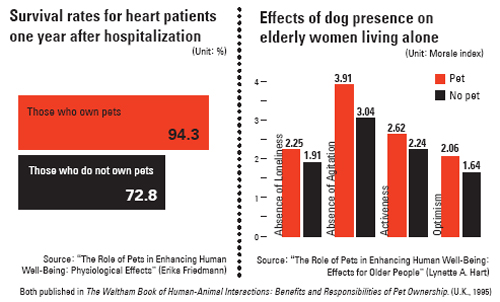 Animal-assisted therapy is relatively new in Korea, but it has a long history in other parts of the world. Animals were used therapeutically in York, England since 1792. Patients with mental problems were given birds and rabbits to play with. They were also prescribed gardening and courtyard activities.

British nurse Florence Nightingale is known as a pioneer in pet therapy, recommending “a small pet animal” as an “excellent companion for the sick” in her “Notes on Nursing.”

American child psychiatrist Boris Levinson is credited as one of the first to theorize the concept of pet therapy. In 1964, he encouraged a group of emotionally-disturbed children to look after pets.

Currently, there are three major organizations in Korea that specialize in fostering therapy dogs and therapy dog specialists and programs: the Samsung Therapy Dog Center, which opened in 1996 in Yongin, Gyeonggi; Korea Animal-Assisted Therapy Research Institute, which was founded in Daegu in 2001 as part the government’s regional development project; and Changpa Animal-Assisted Therapy Research Center, which opened last month at Yeonggwang School, a center for mentally-ill children in Yeongcheon, North Gyeongsang Province.

Changpa was the first animal-assisted therapy research center in Korea to focus solely on therapy for special education students.

“Our school has had two therapy dogs since February last year,” said Kim Hee-cheol, a teacher at Yeonggwang School and program developer at the research center. “We’ve witnessed instances of the amazing therapeutic powers of these dogs.”

Although the initial impact of this kind of therapy is often evident, Kim said, it is difficult to move to the next level of treatment. To find out more, the school sought advice from experts in animal-assisted therapy, rehabilitation science, veterinary science and psychology, and set up a research center.

The school currently runs weekly programs focusing on helping students to interact and communicate with others. The research center plans to develop more programs and train teachers while working with other research centers here and abroad on the effective application of animal-assisted therapy.

“There is a clear difference between animal-assisted activities and animal-assisted therapy,” Moon said. “Just because they [patients] show interest in the animals, touching and playing with them, it doesn’t mean they’ve been cured. They should be able to form a relationship with the dogs and to translate that into positive relationships with human beings.”

In many instances, teachers, doctors and social workers involved in therapy sessions and the dog handlers who train the dogs did not have a clear concept of animal-assisted therapy. This is a danger since a lack of knowledge and training could lead to traumatic experience for both the patients and the dogs.

“This is an area that calls for close cooperation among many different professional fields like medical science, veterinary science, behavioral science, psychology and education,” Moon said.

Although there are few studies on animal-assisted therapy in Korea, healing tails and paws have been making a difference to people’s lives, not just people with dementia.

In 2006, Moon and his team trained 10 people with developmental disabilities to become qualified dog handlers. It took 25 weeks, compared to the 12 weeks it takes to train an average student. Nine of the 10 received honorary handler’s certificates at a dog show held by the Korean Kennel Club in Daegu.

Moon plans to train another group of people with developmental disabilities for next year’s show.

“We wanted to help those young people get a second chance,” said Ha Woo-jong, assistant manager of international relations at the Samsung center. “We chose well-behaving inmates and taught them how to give obedience training to the dogs. We hope it will give them a fresh start and do the right thing when they go out to society again.”

Lee Joo-yeon, from the Samsung center, is Korea’s first animal-assisted therapy coordinator. Since 2002, she has participated in more than 160 programs, including the one at the Cheonan Juvenile Correctional Institution.

“Dogs are territorial animals, so it’s their instinct to react to new, unfamiliar places and people,” Lee said. “It’s important to select dogs with a calm temperament and teach them to follow orders and to stay steady and affectionate no matter what is going on around them.”

Samsung Therapy Dog Center currently has 20 therapy dogs. Every year the center trains about 10 new dogs, which means patients like Sim can have more four-legged friends.

“I really like Namoo,” said Sim as we said goodbye. “He always listens.”