A regal parade of portraits of the Joseon Dynasty elite

A regal parade of portraits of the Joseon Dynasty elite 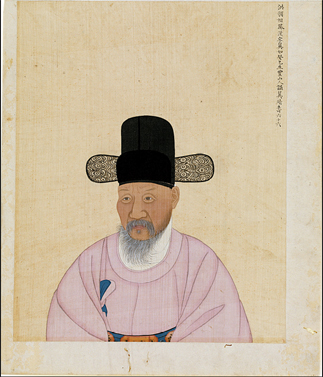 A portrait of Hong Bong-han (1713-1778), a grandfather of King Jeongjo. Provided by the organizer

“If you miss even a hair, it’s not the same person any more.”

This was a common saying among portrait painters of the Joseon Dynasty (1392-1910). Portrait painting of the period is considered one of the most sophisticated genres in traditional Korean painting.

Understandably so it was only important figures like the nation’s rulers, government officials, religious leaders and intellectuals who had their portraits done.

Starting on Saturday, Gyeonggi Provincial Museum will be hosting an exhibition of the genre: “Portrait, Painting the Eternity.”

“Portrait painters during the Joseon Dynasty sought to deliver not just the subjects’ looks, but also their spirit, what kind of people they were.” said Lee So-hee of the museum.

The exhibit showcases about 50 portraits, forty of which are from the museum’s collection. The Gyeonggi provincial museum has been collecting portraits from the era since the 1980s, and this is the first time the entire collection has been unveiled to the public.

“Portrait paintings are very hard to preserve,” explained Pak Bon-su from the museum’s collection management team. “A lot of the portraits people donated to us were severely damaged over time since they are very sensitive to temperatures and dampness. Experts of ancient documents and relics helped us restore them.”

Eight of the portraits are national treasures. The oldest picture in the exhibit is the 1555 portrait of Jeong Mong-ju (1337-1392), a prominent scholar of the Goryeo Dynasty (918-1392) who was murdered by political rivals. Led by Yi Seonggye (who became King Taejo of Joseon), they replaced Goryeo with Joseon. Also displayed are portraits of Hwang Hee (1363-1452), a revered prime minister, and Heo Jeon (1797-1886), a Confucian scholar from the latter part of the dynasty.

“Portrait, Painting the Eternity” will be held from June 21 to Sept. 28. Entrance is free. For more information visit www.musenet.or.kr.