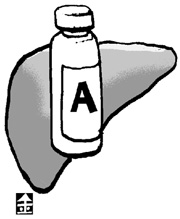 During the 1980s, liver cancer ranked as the second most common form of cancer in Korea, after stomach cancer.

In response, the government launched a nationwide campaign to promote awareness of hepatitis B, which is the leading cause of liver cancer. The campaign aimed to educate the public about the need for higher standards of food hygiene.

Thanks to such efforts, the results were a great success. The rate of hepatitis B fell from 10 percent in 1985 to 3.7 percent in 2004. The rate of liver cancer was lowered and now ranks third among cancers for males and seventh for females.

It is still considered today as one of the great success stories in the crusade against parasites in Korea’s history of disinfection.

However, it makes no sense at all from a scientific perspective. Hepatitis B is an infectious disease spread mainly through syringes, blood transfusion and sexual intercourse. It has nothing to do with water and food. Only hepatitis A can be contracted by ingesting contaminated food and water.

Hepatitis A was categorized as one of the most common diseases of developing countries in the past, together with cholera and typhoid. It was considered a disease that only broke out in countries with poor sanitary conditions, mostly in underdeveloped nations.

However, these days it has been added to the list of developed countries’ diseases. Apparently if you grow up in a very clean environment you will be more vulnerable to this disease during your adult years.

Most Koreans in their forties lived in unsanitary environments in their early years. They have most probably been infected with the hepatitis A virus during their childhood, and thus carry antibodies. It poses no threat to them, even as hepatitis A becomes more widespread.

However, for the young and people in their 20s, the rate of antibody possession is less than 5 percent.

There is a saying, “People born after 1952 easily catch measles, and those born after 1980 are threatened by hepatitis A and smallpox.”

Hepatitis A does not become chronic, unlike hepatitis B. If you catch hepatitis A during childhood, you can easily recover, like you do from a common cold. However, if infected with hepatitis A as an adult, you can suffer serious symptoms resulting in hospitalization.

Last month, popular singer Kim Won-jun was almost forced to cancel a concert due to hepatitis A. It could be called “infectious hepatitis.” Last February, hepatitis A could have attacked many Hollywood stars who gathered together at a celebrity’s party.

Koreans are overreacting to mad cow disease and even avian influenza, although there have been no cases so far.

Meanwhile more than 1,000 patients are suffering from hepatitis A. Perhaps it is high time for us to take appropriate measures against hepatitis A.

The writer is a JoongAng Ilbo reporter specializing in food and medicine.