A true tale of escape from North Korea

A true tale of escape from North Korea 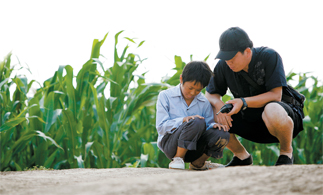 Expect some tears to well up in your eyes. “Crossing,” directed by Kim Tae-kyun, is coming out tomorrow.

The film is a desperate journey for survival. North Korean defector Yong-soo (Cha In-pyo) crosses the Tumen River, which lies on the boundary between the reclusive nation and China, to escape his brutal homeland.

There, he hopes to earn money for his frail, pregnant wife and starving son, Joon (Shin Myeong-chul).

His original aim was to cross back to the North with some money and medicine. But before he knows it, he is joining a group of other North Koreans entering the German Embassy in Shenyang, in northeastern China, and eventually ends up in South Korea. 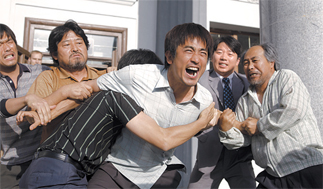 Cha In-pyo (center), as North Korean defector Yong-soo, cries out for his familyin front of the German Embassy in China. Provided by Coming Soon

Yong-soo misses his family, and saves up money in the hope of going back to them. Later on, however, he finds out that his wife is already dead and that Joon is on a quest to join his father.

It’s roughly based on the true trials of Yoo Sang-jun, an actual North Korean defector who broke into the Spanish Embassy in Beijing in 2002. He had also left his family behind in his homeland, where his wife and son starved to death.

But Kim didn’t discuss the details of the production with Yoo, wanting to keep the project a secret.

Instead of Yoo, Gim Cheol-yong, the film’s assistant director, was Kim’s right-hand man in making the production feel true to life. Pieces of Gim’s story were also weaved into the film.

Gim, who defected from the North in 1999 and arrived in the South in 2001, has also had his share of harrowing adventures. He studied film at Hanyang University.

Like Yong-soo from the movie, Gim crossed the Tumen River into China. There, he worked at as a lumberjack in Yanji, a city in the Yanbian Korean Autonomous Region in northeastern Jilin Province.

His three-year stay in China came to an abrupt end, however, when he was arrested by Chinese police and forcefully repatriated to the North, an incident also depicted in the film.

The depiction of the concentration camp in Chongjin, South Hamkyong Province and Hanawon, the state-run institute that provides education programs for defectors in South Korea, is based on Gim’s accounts.

He escaped again later. And like Yong-soo’s son Joon, Gim crossed the Mongolia border to arrive in South Korea.

By the time Kim asked for Gim’s help, the director had already met with many North Korean defectors and the screenplay was almost complete.

Specific details, however, were left to Gim. He helped actors practice lines in a North Korean accent, chose filming locations and selected props and costumes.

“Obviously, these aren’t delightful memories to recall,” Gim said, noting that at first, he refused to get involved in the project.

But Kim managed to convince him. “Kim said, ‘If people directly involved with the issue won’t face reality, how can others get involved in helping?’”

But the journey that he took while producing the film dug up difficult memories.

“I read the script on the way back home [after meeting Kim] on the subway,” he said. “I was halfway through and couldn’t stop myself from crying.

“The script was honest and true,” he said, adding that the brutal depictions of the concentration camp aren’t exaggerated at all.

In fact, the film only depicts one-tenth of what’s really happening in North Korea right now, he says.

Originally, Gim’s frank confessions of his experiences were far harsher than those in the movie.

The production crew, believing some of his stories to be too shocking for South Koreans to handle, didn’t include some of the more graphic accounts in the film.

“The tragedy told in the film isn’t something that happened in the past, it is happening right now,” said Gim.

To Gim, the ongoing suffering of the North Koreans can’t be neglected. “We have to face it,” he said.

To help raise awareness, Gim is currently revising another film project that will go back to North Korea, and deal with the real life that people there face on a daily basis.