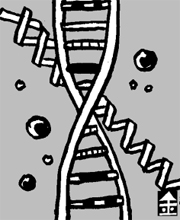 When explaining the scale of new development projects, the size of Yeouido is often used as a yardstick. However there are two ways to measure the size of the island. Some say it is 8.4 square kilometers and others 2.95.

The larger figure covers the area that Yeouido-dong Office in Yeongdeungpo District, has jurisdiction over, which also includes parts of the Han River surrounding the island. But if only the land is measured, the much smaller figure stands. So when comparing the size of an area to the size of Yeouido, it is incorrect to tout the bigger one.

The British biologist Richard Dawkins coined the term “meme” in his book “The Selfish Gene” 32 years ago. A meme is a cultural gene, something that people learn naturally, such as a birthday song or cultural traditions. Claiming the size of Yeouido is 2.95 square kilometers can be seen as a meme.

The term meme comes from the word gene. A meme spreads itself like a living organism with a capacity to reproduce.

For the past three months, Korean society has been driven by three memes. The first was the avian influenza virus. The virus in itself is not a risk, but if it penetrates into birds’ cells and then its DNA mutates, the dangerous H5N1 virus can be produced.

The second is prions, which are causing the widespread dispute over the safety of U.S. beef. Prions are protein particles found inside the brains of people or cows. If mutated prions appear, they reproduce and can cause bovine spongiform encephalopathy, or mad cow disease.

The third meme is the bizarre rumor that if the water corporation is privatized, the price of tap water will surge 100-fold.

The public panic over mad cow disease is also a meme that spread through the Internet.

In Britain, there is a growing dispute over the authenticity of information on the Internet. A rumor spread that middle school students in Scotland are failing examinations because they take somewhat dubious information from Wikipedia, an online encyclopedia, as the truth. As Wikipedia users can anonymously edit its contents, inaccurate or intentionally distorted information can easily pass as fact.

When DNA reproduces in the wrong way, mutations occur. Changed prions cause mad cow disease. Inaccurate memes have negative influences on society, and in the era of the Internet, memes reproduce much more quickly than they used to.

To keep the Internet a trustworthy place, netizens must make an effort not to create inaccurate memes.