You are what you eat

You are what you eat 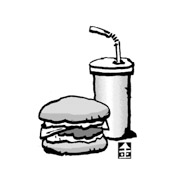 “Super Size Me,” a 2004 movie directed by Morgan Spurlock, warns of the danger of fast food. The director ate only super-sized McDonald’s meals for a month and filmed the subsequent changes in his body, which were drastic. Spurlock gained five kilograms in a week and suffered headaches, lethargy and depression.
While Super Size Me focused on fast food and health, “Fast Food Nation,” a 2006 movie that will be released here next month, penetrates the fast food industry.
The title of the movie sounds like a metaphor for the United States as a modern society dominated by fast food. The movie is based on a nonfiction book written by journalist Eric Schlosser, and directed by Richard Linklater who directed “Before Sunrise” (1995). The book was on The New York Times best-seller list for two years and the movie was nominated for the Palme d’Or at the 2006 Cannes film festival. The movie features muscle man Bruce Willis, Ethan Hawke and defiant rocker Avril Lavigne.

In the movie, Mickey’s is a fast food chain company and Cody in Colorado is a made-up city. A rumor starts that local burger patties are contaminated. A marketing executive from the food company is dispatched to Cody where there are slaughterhouses and large-scale farms. The executive investigates the slaughterhouses and the production lines at the factory, where most of the workers are illegal migrants from Mexico.
The film shows how a hamburger for less than $1 can be produced and environmental activists’ dreams are illusions.
Fast Food Nation offers a deep look at the beef industry; the film’s release couldn’t be more timely. The movie reports on the life of cows, from farms to tables. The latter part of the film shows realistic scenes of cows getting slaughtered. The director is a vegetarian, apparently, and had difficulty filming these scenes.

It is true that the film is extreme and agitating, but it vividly conveys how food issues are emerging as sources of conflict in modern society.
Food is at the center of politics, society, environmental issues and class conflict. As Ulrich Beck has pointed out, the most ordinary issues are becoming the most political.
After the disputes over importing U.S. beef, more health-conscious households in Korea are looking for safer food items, spending more money on food than they used to.
Today, what you eat and the food’s level of safety can have a profound impact on your life, your identify, your social status and political stance.