[Review]A quiet change of pace for a summer day

[Review]A quiet change of pace for a summer day 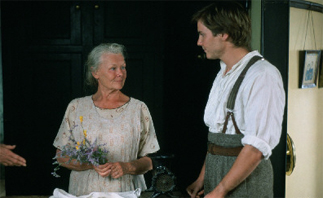 Ursula (Judi Dench) finds herself enchanted by Andrea (Daniel Bruhl), a handsome young foreigner who washes up on the shore near her home. [Outnow.ch]

There never was a prissier title for a film than “Ladies in Lavender.” Fortunately, the film itself, while definitely on the genteel side, is much more winsome that its rather off-putting title.

Ursula (Judi Dench) and Janet (Maggie Smith) are the two ladies of the title, elderly, single sisters who live on the English seaside in 1930s Cornwall.

The story, derived from a short story by William J. Locke, unfolds in a very conventional manner, as I imagine the short story does. The scene sets on Ursula and Janet on an idyllic walk, enjoying their everyday life of simple suppers, taking in a bit of a program on “the wireless” (or radio, for all the Yanks out there) and ocean air.

Several minutes into the film, a storm brews on the Cornwall coast, depositing adventure, in the form of a handsome young man, into the two women’s lives.

And while this story is ? here comes that word again incredibly conventional, it’s nonetheless charming in its own quiet, proper way. The ladies, who find their stranger washed ashore half-dead, nurse the boy to health. They learn, through some broken German, that his name is Andrea (Daniel Bruhl), and he’s Polish. Speaking no Polish themselves, the sisters do their best to communicate via pantomiming, awkward German and loud, slow English.

But while Janet easily takes a maternal approach to Andrea, Ursula, who unlike Janet never found love in her youth, finds her feelings for Andrea are more complicated.

Of course, being an English lady, Ursula is of course too upright to do anything about her affection for the much younger Andrea other than tenderly watch him sleep. But that doesn’t mean she and Janet won’t stop at driving away any young female admirers. Andrea, of course, attracts the attention of Cornwall’s young ladies, especially Olga (Natascha McElhone), a fellow foreigner in the town.

But, as we learn, Olga’s interested more in Andrea’s musical ability, which the ladies discover by accident one afternoon. As it turns out, Olga’s classical music royalty, the sister of a great violinist. However, as the beginnings of World War II simmer to England’s east, Olga and Andrea’s whispered German conversations become misinterpreted by some curious townsfolk.

Ladies in Lavender, while sweet, is unfortunately a bit too far on the aloof side to really appeal to viewers’ emotions. The film never probes the depths of Ursula’s feelings, or Andrea’s and Olga’s, for that matter. Other than touching briefly on some townspeople’s xenophobia, the story never really gets its hands dirty with that subject.

Most unsatisfying of all, the ladies never find proper closure in their relationship with Andrea. The story veers off from the tender relationship among Ursula, Janet and Andrea to the young man’s budding career as a violinist ? probably to legitimize the presence of real-life virtuoso Joshua Bell on the film’s soundtrack.

Ladies in Lavender does, however, provide welcome reprieve from the loud, clanging superhero blockbusters this summer is churning out. The film is by no means perfect, but it’s quietly enjoyable with enough brilliant violin playing to be interesting.