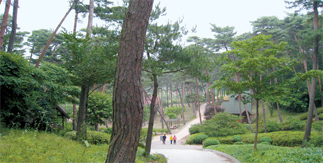 It’s nothing like Macao’s casinos or tourist-laden Hawaii, but Anmyeon Island offers city people something exotic: peace of mind.

There are no trains to Anmyeon Island. Taking the bus costs around 10,000 won ($9.60). By car from Seoul, it takes about 2.5 hours, or 3 hours with a break included. But bear in mind that rather than using patrol cars to catch speeders, cameras are placed along the highways to enforce the speed limit. Using a decent navigation system that gives advanced warning of cameras is recommended.

The island, southwest of Seoul, doesn’t have mammoth hotels plastering the skyline but there is certainly no shortage of affordable pensions located inland and along the coast. You probably want to book a pension on the shoreline with a good view. Even then, the prices won’t break the bank. They vary but the overall range is from 50,000 won to 200,000 won, depending on group size, for most accommodation. 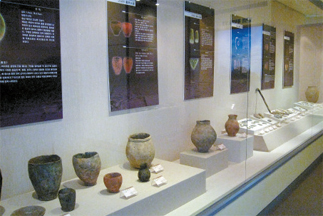 The island’s sole museum is the Gonam Shell Mound Museum where artifacts date back to the Goryeo Dynasty.

I chose a place called Pension Pebble Beach. It offered a 50 percent discount on its rates until the end of last month. I paid 50,000 won instead of 160,000 won for a double room. However July and August are considered peak season. July commands the highest prices, but in August the prices drop slightly.

Pension Pebble Beach consists of three white buildings with terraces built in typical resort style situated on a small hill overlooking Ojeom village. Like other pensions in the area, the bathroom has a shower but no bathtub.

It doesn’t take long to get to the beach from the inland but still, if you are looking for a romantic date with your partner, a seaside pension is highly recommended. Like Pebble Beach, most places rent out barbecue equipment for seasonal meals on the terrace. A view looking out toward the sea is probably preferable to one overlooking a rice field. 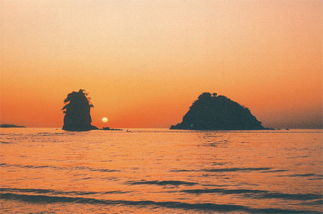 The island has many beaches.

Pebble Beach has a swimming pool on top of one of its buildings, an option that not too many pensions have. Apart from tourism, Anmyeon’s economy relies on agriculture, with rice, sweet potatoes, barley and red pepper as the main crops. The nearby sea provides fishermen with octopus while shrimp is bred in fish farms.

The only drawback I could find, and this would be common with most places on the island, were the insects. Most pensions have mosquito nets on their windows and balconies but occasionally insects will get through. Spray insect killers are usually provided but I would strongly recommend the plug-in type that can be used throughout the whole night, virtually guaranteeing uninterrupted sleep. Most convenience stores offer some type of electric insect killer devices.

Anmyeon Island is located on the West Sea, which is less developed than the East Sea. Thus, the whole island (the sixth largest in the nation) is less crowded and its beaches don’t resemble anything close to what can be seen at Haeundae in Busan, the country’s most famous and most packed shoreline. 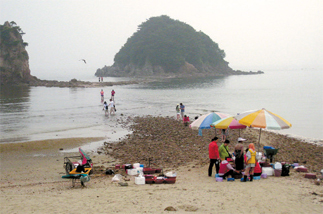 The island has many beaches, but Kkotji is the most famous. By Brian Lee, [JoongAng Ilbo]

The selling point of the island is a double-edged sword. Finding a 24/7 convenience store can be a little bit tricky. There are plenty of mom-and-pop shops scattered around the island but selection at these establishments is limited, and they often close early.

Most recommended is buying your munchies and favorite drinks in Seoul before you leave. If not, one of the biggest stores on the island is the Green Mart at Lotte Ocean Castle, a resort condominium only open to members. But facilities such as the store and sauna are open for tourists. The store can be reached within half an hour from even the most distant locations on the island. It is open till midnight and offers a fairly large selection, with everything from milk to my favorite mosquito killers.

As for sightseeing, the Gonam Shell Mound Museum (www.museum.taean.go.kr) is the only one on the island and by default a location worth a visit. Established in 2002 it is open from 9 a.m. till 6 p.m. in the evening. It displays about 470 artifacts from as early as the Goryeo Dynasty and later periods. It’s closed on Mondays and admission for an adult is 1,200 won, while kids under 6 and senior citizens over 65 can enter for free. 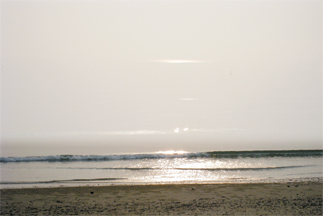 Personally, I found the museum a little bit small but anyone interested in ancient artifacts should visit. A little bit over half an hour should be enough to walk through the two main exhibition halls offered. Apart from vases that go back to the Goryeo Dynasty, it features an exhibition hall displaying life in rural Korea and various traditional customs of Anmyeon Island.

The island’s most famous beach is Kkotji, located on the western coastline. Not far away from the shore are two small rocks named “Grandfather” and “Grandmother,” and easily reached by foot at low tide. Like any beach earmarked for tourists, Kkotji has its fair share of restaurants bordering the shore, but beware, prices are high. A sashimi set for two, including a spicy fish head soup commands a price tag of 60,000 won or more. Restaurants offering a seaside view demand slightly higher prices.

The West Sea waves are relatively quiet compared to the East Sea, a drawback if you are looking for a fun ride in your tube, but for beginner swimmers and families, it’s a good option. Along the beach as well as inland, you can try your hand at paintball or go for a spin in a four-wheel ATV quad bike. The latter costs 10,000 won for 10 minutes. Most beaches have vendors selling fireworks.

Among the island’s offerings, the Anmyeon Recreational Forest is probably the most worthwhile. It’s one of the largest pine forests in the country. You can select trails that take 15 minutes or up to one hour, and enjoy some forest bathing. The idea is simple: Walk in nature and breathe the fresh air. It’s called forest bathing because you can soak up phytoncide, a substance given off by plants to protect themselves from insects and rot. It’s supposed to be good for you. That may sound silly, but considering how bad the air is in the city, it can’t hurt.

The stress of city life probably leaves little time to communicate with your family and friends. A walk in the park may just be the best cure. If you are alone, this is the place to gather your thoughts.

All in all, I have to admit, Anmyeon is still raw in its offerings when it comes to food and leisure facilities. I wouldn’t mind having a nice pasta meal in the evening with the right wine or a modern bar just to hang out with friends. The island’s scenery is nice but subtle. There is no Niagara Falls to make your jaw drop or a Grand Canyon to make your eyes pop out.

Anmyeon people are mostly involved in agriculture so there are no exciting cultural performances, no fancy dancing or ethnic rites to witness, like in some areas.

So what’s in it for the traveler? For a weekend getaway not far from the metropolitan area, Anmyeon fits the bill, literally. For a family outing, I don’t know whether kids would endure the lack of entertainment that traditional resort areas offer. Tourism at Anmyeon is simple: People are offered a clean place to sleep in a place distant from city life.