The Seoulful flavor of Pierre Gagnaire

The Seoulful flavor of Pierre Gagnaire 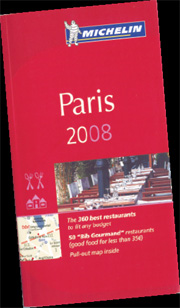 The Red Michelin Guide for restaurants in Paris. [JoongAng Ilbo]

“Pierre Gagnaire” is a Michelin three-star restaurant, and there’s a chance to taste its specialties this fall in Seoul.

A branch of the restaurant will open at Lotte Hotel, Sogong-dong, central Seoul, in October. The restaurant, named after a well-known French chef, was ranked third among the world’s 100 best restaurants in 2007 by “Restaurant,” a British gourmet magazine.

Here is a glimpse of the Parisian restaurant:

The first impression of Pierre Gagnaire is dull and stodgy. The interior is dim. But the dishes it serves lend color to the atmosphere.

The first part of the three-course menu are the amuse bouche, bite-size morsels to tease the palate.

These dishes include tuna, fritters, anchovies with olive oil and raspberry sherbet with carrots, which taste slightly of alcohol.

According to the restaurant’s chef, the carrots are marinated in sake, the Japanese alcoholic drink made from rice. 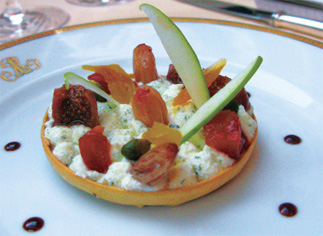 A goat-cheese fruit dessert served at Lasserre, a two-star restaurant rated by the Michelin Guide. It is located near the Grand Palais in Paris.

The main dish is roast veal with fried mushrooms and mushroom cream. The side dish is barley risotto with frogfish and lobster. There are some 10 desserts including beer mousse, wasabi ice cream and grapes. The three-course menu costs 105 euros ($164.74).

“Pierre Garniere’s dishes are beyond imagination,” said Gwendal Poullennec, the director of the Michelin Guide in Tokyo. “They [dishes] are like jazz you never know when the drum and bass will start playing.” 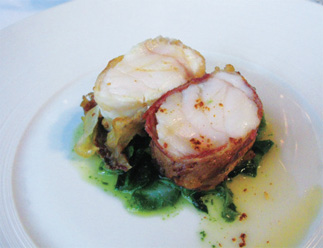