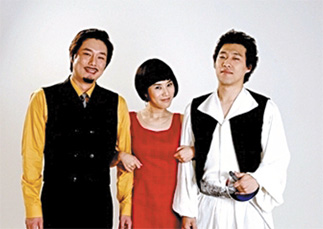 From left: Penza, Romeo and Bernadette. Provided by A&B Musical

There are several comic interpretations of the famous Shakespearean tragedy, “Romeo and Juliet.” We have already seen one of them, “Shakespeare in Love,” win an Oscar.

But what if this time Romeo travels through time and declares his love for Juliet not in fair Verona but in the back allies of 1960s Brooklyn as a member of an Italian mafia family?

Seem odd and sound comical? This is the basic idea behind “Romeo and Bernadette,” a play that will be performed at the Naru Art Center in Seoul, until Aug 10.

The story starts with Romeo emptying a bottle of poison, which instead of killing him puts him into a deep sleep that lasts for centuries.

He wakes up in modern times where the world has become quite different from the one he remembers.

The young romantic mistakenly takes Bernadette, the only daughter of a New York mafia don, Penza, who was on a trip with her family in Verona, as his beloved Juliet.

Bernadette is no Juliet with her rough New York attitude and infatuation with luxury.

Although Bernadette made it clear that she has no clue about who Romeo is, the young Italian follows her to Brooklyn to prove his love.

Alas, unfortunate for Romeo, Bernadette is already engaged to Tito, the trigger-loving second in rank of the Penza family. During an assassination attempt by Tito on Dino, the only son of a rival mafia don, Del Canto, Romeo saves Dino. In return Del Canto adopts Romeo as his godson. And the tragedy of two rival families starts again, only this time it is in Brooklyn.

A heads up for male audience members is to get ready to cover the eyes of your date during the abrupt appearance of Sebastian, during the second act of the musical. His muscle-bound body will have your date completely enchanted for the remainder of the evening.