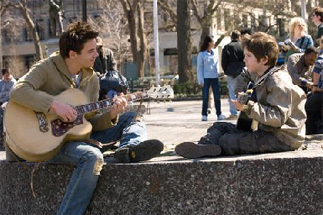 August, right, and Louie in a guitar duel at a New York park. [Movie Week]

If you are looking for a melodious movie, I highly recommend “August Rush.”

Beautiful classics like Bach suddenly mix with an Irish rock song, and that’s only the start.

There are sentimental and tear-jerking moments flavored with songs like “Moon Dance” and “August’s Rhapsody.”

And a spark of excitement is found when the young August shows his hidden talent in any instrument he grabs when his friend plays “La Bamba” in the streets.

This movie depicts the life of a child named August Rush (Freddie Highmore), originally Evan Taylor, who leaves his orphanage to New York City in search of his parents.

Evan has a strong conviction that his family reunion will happen through music.

It’s not too hard to believe that August is gifted with musical talent since his mother Lyla (Keri Russell) is a concert cellist and his father Louie (Jonathan Rhys Meyers) is an Irish pub rocker/guitarist.

Despite all of the film’s enchanting music and August’s good looks, it fails to clarify certain messages.

For example, the movie focuses so intensely on August that it fails to answer how Lyla and Louie were attracted to one another by the song “Moon Dance.”

And it was annoying when I saw a pair of hands that were obviously much older than Augusts’ conspicuously shown whenever August played an instrument.

Those scenes broke my mood of being dazzled by how much a young kid could play so magically.

Regardless, the songs are too amazing to make me dislike the movie.

The “August Rush” DVD features commentaries by director Kirsten Sheridan and the cast.

They talk about the underlying message of the movie ? that music is heard by everyone and through everything, if you listen. They also say that music is not something you simply enjoy with your ears ? you allow it to be the source of finding your identity.

Special features include a handful of deleted and altered scenes, including one that redeems Wizard’s (Robin Williams) character as a good guy.

The DVD’s special features were the bare minimum of what any other DVD would have these days.

I wish the DVD contained August’s special guitar lessons or something about the film’s sound-track. Flawed or not, I think the sound track is the finest feature of the movie.

I’m sure the songs are good on their own, but you’ll have to watch the movie to get the right goose bumps.