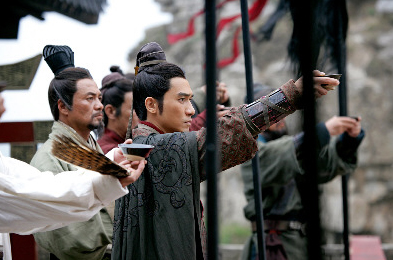 The “Romance of Three Kingdoms” is comparable to the Bible in East Asia. It’s one of the most-read if not, the most-read classics in the region.

It’s a Chinese historical novel based on the turbulent events in the final years of the Han Dynasty and the Three Kingdoms era more than 2,000 years ago.

“Red Cliff,” based on the novel as well as historical records of the Three Kingdoms, takes us back to the year 208 when the Battle of Red Cliff dramatically altered Chinese history.

The ambitious northern warlord Cao Cao (Fengyi Zhang) dreams of unifying China and becoming an Emperor himself. His army has already conquered more than half of China and Emperor Xian is no more than a puppet.

Cao Cao raises a million-man army against a southern kingdom ruled by Liu Bei. With the help of loyal soldiers like Zhao Yun (Jun Hu), Zhang Fei (Zang Jinsheng), and Guan Yu (Basen Zabu), the people flee to another kingdom in the south ruled by Sun Quan (Chang Chen). But they’re far from safe from Cao Cao’s forces.

As Cao Cao prepares a huge navy to destroy the armies of both southern warlords and invade southern China, Zhuge Liang and Zhou Yu, the military brains behind the battle, devise their grand scheme. Plus, they struggle to put aside the rivalry and different war tactics between the forces.

By far the most expensive Asian film invested in by Korea, Japan, China, Hong Kong and Taiwan, Red Cliff lived up to my expectations in more ways than one.

While the battle scenes were as bloody, brutal and done in a massive-scale as they were in 300, Troy and the Patriot, director John Woo didn’t forget to insert aesthetic details in between.

A scene where Zhuge Liang and Zhou Yu together play a traditional Chinese string instrument is one of the most critical, intense scenes in which the two connect and agree to join hands. Woo softens the war movie with beautiful, resonating sounds and harmony.

Romance is also a vital element in the story. Cao Cao has his eye on the beautiful girl he met in the past, who is now Zhou Yu’s wife. The painting of the girl, drawn by Cao Cao himself, makes the audience wonder if she is the cause behind this immense battle, which is very reminiscent of Helen of Troy.

In Asia, Red Cliff has been released in two parts totaling over four hours in length, with the first part premiering this month and the second in January next year.