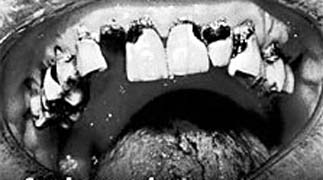 There are many ways to make people quit smoking.

Placing shocking photos on cigarette packs is one method, a tactic that Canada introduced in 2000.

A photo of gums disfigured by cancer makes cigarettes less appealing, as do photos of lungs riddled with cancer cells, brains ravaged by cerebral apoplexy and hearts with closed arteries.

There are even pictures of a limp cigarette butt with the catchline, “Smoking causes erectile dysfunction.”

Anti-smoking photo warnings were one of the policies recommended by the World Health Organization in its Global Framework Convention on Tobacco Control.

Korea ratified the agreement in 2005, but has not applied it yet.

The government presented an amendment to the National Health Promotion Law with the above recommendation.

But because it came two months before a presidential election, it was automatically discarded and never debated.

Why is the government so slow in presenting a proposal for introducing photo-warnings, an approach that has been internationally proven to be highly effective in moving people to quit smoking?

The government’s sole action has been to submit a proposal to increase cigarette prices back in 2004 and 2005.

This makes us suspect that the government is more interested in tax revenue from selling cigarettes than people’s health.

According to the report, the National Health Insurance went into the black to the tune of $157 million as of June.

One of the main reasons for the surplus? The cigarette surcharge.

The WHO defines cigarettes as a drug. This is why in 14 countries, including Singapore, Thailand, Australia, Chile, Hong Kong and New Zealand, warning photos are placed on cigarette packs.

Thirteen other countries, including Romania and the United Kingdom, plan to introduce them soon.