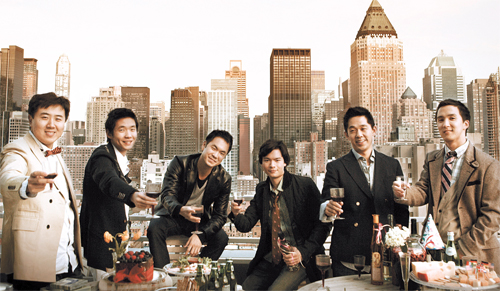 The chamber orchestra Ditto sold the most tickets for a classical concert in the first half of the year. Provided by the organizer

How did the classical performing arts do in Korea in the first half of this year? Despite lingering economic woes, a number of classical concerts did better than expected, and some even saw full houses.
What has been the key? Youth seems to be essential.
The JoongAng Ilbo has compiled data from three major classical concert halls in Korea: the Seoul Arts Center, Sejong Center for the Performing Arts and Seongnam Arts Center.
Looking at the most popular classical concerts in the first six months of the year, it’s easy to spot common factors: local appeal and a familiar repertoire. 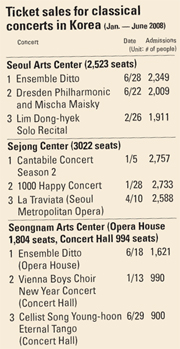 Keyword No.1: Young artists
Last month, six young men took the Korean classical music scene by storm.
Together they are called Ditto, a chamber music ensemble. They have just wrapped up a ten-city tour, which played to 95 percent capacity. The concerts at the Seoul Arts Center and Seongnam Arts Center attracted record audiences in the first half of this year.
The musicians in Ditto are in their late 20s to early 30s. They include violist Richard Yongjae O’Neill, violinist Johnny Lee and pianist Lim Dong-Hyek.
They played familiar songs like “Die Forelle” (The Trout) by Austrian composer Franz Schubert.
Experts say their case indicates the potential selling power of classical music. “We found that 70 percent of the audience were in their 20s, and 90 percent of them women,” said Lee Gang-won, a manager at the concert organizer, Credia Entertainment.
The popularity of youth is also evident at classical concerts at the Sejong Center for the Performing Arts.
The Cantabile Concert sold the most tickets at Sejong in the first six months of this year. It was based on the Japanese comic drama Nodame Cantabile. The performers include 29-year-old conductor Choi Soo-yeol and 23-year-old pianist Lee Hee-ju.

Keyword No.2: Local appeal
Cellist Mischa Maisky’s performance with the Dresden Philharmonic Orchestra last month at Seoul Arts Center attracted the second biggest audience at the venue from January to June. His solo recital last year also sold a record number of tickets for a solo recital at Seoul Arts Center.
Maisky has performed four times in Korea since 2003 and won over local audiences with his warm performances. That he wore hanbok, Korean traditional clothing, for his album photos and played classical Korean songs, only added to his popularity. 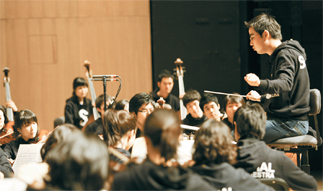 Youth and the popularity of the Japanese drama on which the concert was based made the Cantabile Concert in January at the Sejong Center for Performing Arts a success with local audiences. Provided by the organizer

Keyword No.3: familiar repertoire
It’s clear that audiences love old favorites. The Vienna Boys Choir has performed three New Year’s concerts in Korea. But it was still the most sought-after classical performance in the first half of this year.
“The key is to establish something that people naturally think of at a particular time of the year,” said Lee Ji-young, the marketing manager of Seongnam Arts Center.
This holds true for the 1,000 Happy Concert at the Sejong Center for the Performing Arts. All tickets cost 1,000 won ($1). The concerts take place on the last Monday every month and they have been highly successful since they were launched in January 2007.