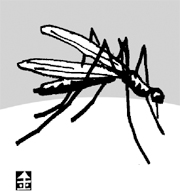 It originated from the popular misconception that “bad air” was the cause of the disease, despite the fact that an Indian doctor had proven that mosquitoes were to blame as early at the 5th century B.C. People held the disease in awe, with some even suggesting that it may have contributed to the fall of the Roman Empire.

Malaria was incurable until the appearance of the wonder drug quinine. The herbal medicine, prepared from the bark of cinchona trees, was unlike other malaria medicines because it had no negative side effects on the human body.

These days, the preventive medicine that Korean people take before travelling to malaria-affected countries is not quinine, but chloroquine.

This compound medicine was first used during the Second World War. At that time, a great number of American soldiers were dying of malaria while serving in jungle areas. With Indonesia’s Java Island occupied by the Japanese, the U.S. army keenly felt the need for compound malaria drugs to be developed.

The type of malaria in Korea is relatively weak and does not have life-threatening consequences, unlike other more virulent tropical malaria diseases. Korea’s malaria is referred to as three-day fever malaria.

In the world of traditional Oriental medicine it is known as hakjil, which literally means “an outrageous disease that people can not endure.” The Korean traditional medical handbook, “Dong-Eui-Bo-Gam,” described the symptoms ?? repeated chills and fever ?? as “fierce struggles between helpful and harmful energies.”

According to Korean health authorities, more than 300 people have caught malaria this year. This could mark the beginning of a possible outbreak.

Malaria was a forgotten disease in Korea from the end of the 1970s until it reoccurred 1993. The number of infected patients per annum has not exceeded 100 in recent years, and patients were mostly soldiers stationed at the DMZ.

However, medical experts have warned that malaria is likely to make a strong comeback in the country.

Some insist that global warming is the major culprit. We think, however, that negligence may have been a bigger contributor to the spread of malaria these days.