A traditional hunt for some modern style

A traditional hunt for some modern style 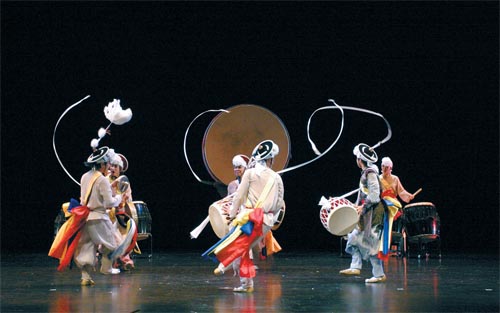 “Tiger Hunter” will be performed from July 23 through 27 at Gwanghwamun Art Hall.Provided by the organizer

Traditional folk entertainment gets a splash of modern flair this week in “Tiger Hunter.”
The show’s organizers Korea Traditional Performing Arts Federation and Samulnori Hannullim, a traditional performing arts troupe categorize Tiger Hunter as yeonhui-cal, meaning it’s a blend of yeonhui, traditional theater, and musicals.
Tiger Hunter is the second-to-last performance of the 100-day Yeonhui Festival. The event originally kicked off in May to celebrate the opening of Yeonhui Theater, part of Gwanghwamun Art Hall devoted exclusively to traditional folk entertainment.
Yeonhui includes masked dramas, puppet shows, tightrope walking, shamanistic rituals and samulnori percussion, just to name a few.
Tiger Hunter is based on the Korean folk tale “Kumgang Hunter.”
In the story, 10 years have passed since a tiger on Mount Kumgang ate Yong-gi’s father. After finding out that his father was one of the best tiger hunters in the country, Yong-gi decides to catch the tiger himself. 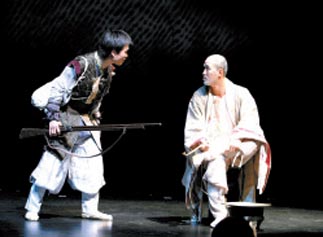 “Tiger Hunter” features a mix of traditional entertainment and modern audio and visual effects.Provided by the organizer

The actors consist of award-winning traditional entertainers from a performance group called The Gwangdae, which first performed Tiger Hunter in January last year. It received good reviews from the audience for its mix of traditional dances, music and circus acts and dynamic modern effects.
“The show has something for everyone,” said Lee Gyeong-pil from Yeonhui Theater. “There are familiar elements for adults, colorful and spectacular stage settings for younger people, and an imaginative and adventurous story for children.”
The 100-day Yeonhui Festival will close on Aug. 3 with “Traditional Dramatic Entertainment Play: Travelling Together.”
“People think that traditional folk shows are boring, dull and for old people only,” said Lee. “But with our performances, which add a modern twist, the audience said it realized traditional shows can be fun and exciting.”
The organizers will stage another fusion performance, “Road,” on Sept. 3.