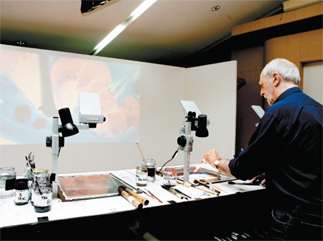 “It feels strange that I’m participating at the music festival. It’s a bit awkward. But I think that I’m playing ‘music to see.’ It’s a unique piece,” said Nam Myeong-ryeol, 49, a veteran actor in Korea.

Nam will be appearing in “Eh, Joe,” the opening act at the upcoming International Great Mountains Music Festival and School. The event, now in its fifth year, features 16 days of classical concerts and classes at the scenic mountain resort area of Pyeongchang in Gangwon Province. 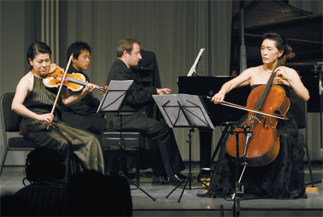 Joe, the main character, agonizes over a woman’s voice he keeps hearing in his head. Joe represents people today who suffer from inner demons and paranoia.

Regarded as one of the most important mentors to young musicians and composers, Earl Kim taught at the music school of Princeton University for 15 years, and Harvard University for 23 years. His compositions are known for their frequent use of literary elements.

“As we collected the pieces that we were impressed by and that we hope to introduce to the Korean public, we spotted a common denominator coexistence of music, image and text,” said Kang Hyo, the festival’s artistic director. Such a crossover of different forms of art is the theme of this year’s festival.

In Eh, Joe, Joe’s imaginary voice is sung by a female soprano in a staccato manner. The main character’s pain, anger and fear that stem from the voice are projected on a large screen. In that sense, the piece is “unique” as actor Nam described, being a blend of the visions of the writer, composer and producer.

Another piece by Earl Kim to be presented at the festival, “Dear Linda,” also sits on the fence between music and literature. It’s a blend of the letters written by American poet Anne Saxton (1928-1974) to her daughter Linda, with music composed by Kim.

Korea’s seasoned actress Yun Yeo-jeong, 61, will play the anxious mother, the poet. Saxton committed suicide after suffering from a bipolar disorder and drug abuse. Organizers say the piece conveys a mother’s love to her daughter as well as the heartfelt message that “you should be the hero of your own life story.”

The hybrid of music and different art genres is a recent trend in the music scene. In last year’s Great Mountains Music Festival, world famous British kinetic artist Norman Perryman painted his responses to music on the stage, visually sharing his instant take on the sound with the audience.

Earlier this year at Seoul Arts Center, French artist Gerard Economos, one of the forerunners in the concept of “music to see,” also drew on a giant canvas onstage while the Gyeonggi Philharmonic performed Rachmaninov’s Second Symphony.