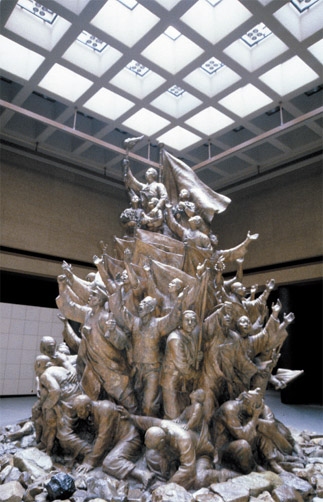 A monument depicts an independence rally at Independence Hall in Cheonan. [JoongAng Ilbo]

CHEONAN - Korea’s fight for independence ended with Japan’s surrender on Aug. 15, 1945. But here at the Independence Hall in the town of Mokcheon in Cheonan, South Chungcheong, a struggle of a different kind is going on a fight to correct distorted information to make sure that people today do not forget the past.

“This place is living testimony to how our ancestors overcame national crises with a love for their country and courage to sacrifice their lives,” said Kim Yong-joo, head of public relations at the hall.

“Unlike what many think, this place is not just about the past. By showing what we have been in the past, it’s also suggesting what we can be in the future,” Kim said.

Besides permanent exhibits, the hall carries out educational, research and political initiatives. Currently, it’s gathering signatures from visitors who oppose Japan’s recent attempts to claim the Dokdo Islets on the East Sea [Takeshima on the Sea of Japan to Japanese] as its territory. So far, about 4,000 people have signed up. On Aug. 15, Independence Day, the signatures will be delivered to the Japanese Embassy in Seoul.

Since the early 1990s, Independence Hall has participated in restoring sites in Shanghai and parts of China, such as Hangzhou and Chongqing, that had housed the Provisional Government of the Republic of Korea. The government in exile was set up following the March 1st Independence Movement. About 130 photos of the restoration work are on display at the hall until Aug. 3.