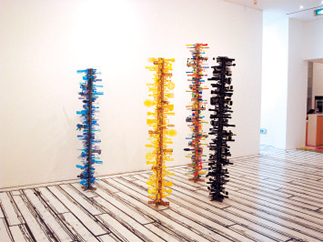 Through humor and parodox, irony has played a dominant role in English culture especially in 19th century romanticism. Kukje Gallery puts the concept on display in “Irony and Gesture,” an exhibition of 11 British artists who incorporate irony in their works.

In art, irony was often used as an expression to transcend the barriers of represented images and present a gap between reality and truth.

The exhibition at Kukje, put together by an independent curator, Lee Ji-yoon, offers a renewed look at contemporary artists whose works reflect the common trends of British art, which is often noted for being cynical and sharply slick.

One of the most standout works in the exhibition is by Richard Woods, whose past works often manipulate the scale of architecture through traditional print techniques. In the current show, he added drawings to make the gallery’s concrete floor look like a wooden surface. 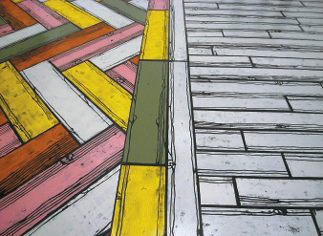 an installation by Richard Woods. Provided by the organizer

David Batchelor puts together a sculptural tower installation made up of everyday objects he collected from a 1 pound shop.

Richard Hamilton, who is dubbed the father of British Pop art, presents a series of works he created between 1952 and 1964 which he reworked into print editions. Yinka Shonibare, known as a member of Young British Artists, questions African identity in Western art history by dressing up characters from famous classical paintings in elaborate costumes made of luxurious African textiles by the artist.

David Shrigley, who began his career as a cartoonist for The Guardian, presents a series of humorous images based on ’70s pop culture. In “The Islanders” series, Charles Avery introduces drawings and figurative sculptures depicting people who the artist argues live on a fictional island.

A product designer, Sam Buxton creates fold-up sculptures made of stainless steel, while Simon Patterson creates a diagram of an ancient city called “Ur”; Sarah Pickstone presents an imaginary landscape on canvas that was recently added to the Saatchi Gallery in London. More playfully, Gary Webb features a series of modules that assembles colored mirrors into a column in zigzag pattern.

“Irony and Gesture: British Contemporary Exhibition” runs at Kukje Gallery in Samcheong-dong through Aug. 14. For more information, call (02) 733-8449. The gallery is near Anguk Station, line No. 3, exit 1.