Rock on, you monsters of metal

Rock on, you monsters of metal 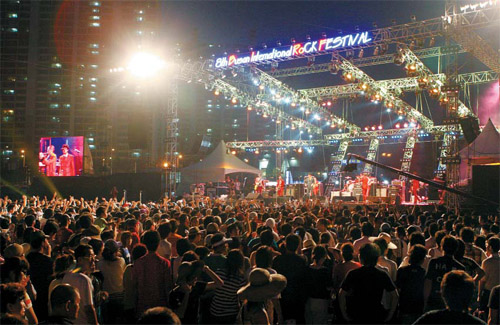 About 80,000 fans descended on Busan last year at the Eighth Busan International Rock Festival. Provided by the organizer

Summer means vacations, beaches and ice cream for most people. But for music lovers, it’s time to rock and roll.

Rock festivals have sprung all over Korea over the past few years, most during the peak of the summer heat in July and August. 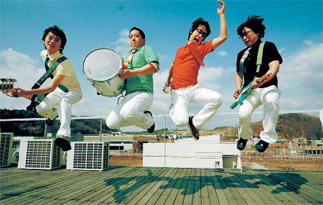 While some rock festivals try to invite international stars, others promote local bands. Y Not, above, will perform at rock festivals in Jebu and Busan. Provided by the organizer

Making a debut this year is Jebu Rock Festival on the tourist island of Jebu, which is about two kilometers off the west coast. The island is less than one square kilometer (0.39 square miles) so there’s not a lot of room to leap around and play air guitar.

Organizers expect about 150,000 fans to show up, mainly tourists, to see the acts, primarily amateur rockers rather than bona fide rock stars. 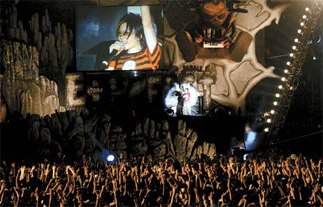 The ETP Festival plans to be an annual urban rock festival. Provided by the organizer

“Seven college bands will play on Day 1, and the next day six bands featuring office workers will take center stage,” said Park Il-young, one of the organizers. Guest bands like Prana and Lazybone will also strum and drum.

“There will be a different kind of fun from other rock festivals,” said Park with confidence.

The Busan International Rock Festival in the southern port city of Busan also takes advantage of its picturesque location. Now in its ninth year, the festival is hoping to attract more than just die-hard rock fans.

“That is why we’ve invited familiar local bands whose voices and songs are easily recognized, like the Hot Potato and Kang Saneh, instead of iconic international groups,” said Noh Ho-seong, part of the organizing committee.

The Busan rockathon is funded by the local government, but this year the budget has been slashed by 100 million won ($99,302). Despite this financial setback, entrance will still be free.

Busan won’t just be turning the volume to 11. There’s be more sedate activities at the gigs, such as a dance festival, magic show and salsa and jazz nights.

The Dongducheon Rock Festival pips Busan to the longevity post. Korea’s oldest rock party boasts the largest lineup with 57 local and overseas bands. Notable acts will include the comeback performance of the recently reunited Baekdusan, an iconic Korean rock group from the 1980s, and the first Seoul concert of American thrash metal merchants Anthrax.

“What’s unique about our festival is the location and its history,” said Kim Hong-rae, part of the organizing committee. “Dongdu-cheon is the birth place of Korean rock and being a military-concentrated borderland, it’s the perfect place to celebrate rock and music which is about peace.”

Wrapping up the summer rock festival season is the Eerie Taiji People’s Festival in the heart of the capital. Organized by legendary pop star Seo Taiji, the festival took place in 2001, 2002 and 2004. But this year will be possibly the most important.

“Although we started out as something more like Seo’s concert, we are trying to become an annual urban rock festival from this year and establish ourselves as a cultural event,” said Oh Sang-hyeon, one of the co-organizers from Yedang Entertainment.

The ETP Festival is currently the only major rock festival not working with the local government, but from next year it hopes to collaborate with the Seoul city government to secure a safe spot among the host of rock festivals in Korea.

Characteristics: The Jebu Rock Festival stages amateur bands that consist of students and adults. Thus, friends and family will comprise the audience. The winning band will take home prize money of 2 million won ($2,000)

Lineup: 9 local bands (Prana, Lazybone, Y Not, among others.)

Characteristics: Busan International Rock Festival takes place with a series of other summer events in Busan such as a singing contest, dance festival, magic show, hip-hop festival and a salsa and jazz night.

Characteristics: Dongducheon Rock Festival is the oldest rock festival in Korea. It is also the longest, running for four days. Its location in a mountain offers a natural, carefree setting for enjoying rock.

Lineup: 57 local and foreign bands (In Soon-i, N.ex.t, Anthrax, Nicotine, among others.)