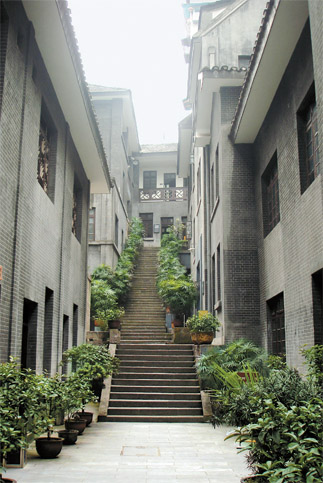 The entrance to the seat of the provisional government of the Republic of Korea in Chongqing.

For this Korean visitor the city shines brightly, at least in Lianhuachi, Yuzhong District, where the former seat of the provisional government of the Republic of Korea still stands.

The patriotic spirit of the country’s independence fighters remains here in their former foreign refuge.

Up a long flight of steps to the 1,600-square-meter building, which was restored in 1995, is a complex with five sections. 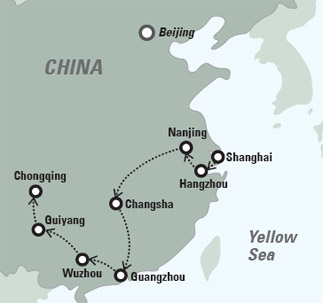 A map tracing movements of independence fighters in China.

Each one displays information about the provisional government, which included military, cultural and foreign affairs offices.

There is also historical information about the establishment of the government in 1919 in Shanghai amid Japanese colonial rule (1910-1945) and its 26 year anti-Japanese independence movement in China.

The provisional government served a leading role in bringing about national independence in 1945.

Many patriots. like Yoon Bong-gil, sacrificed their lives in the anti-Japanese resistance. 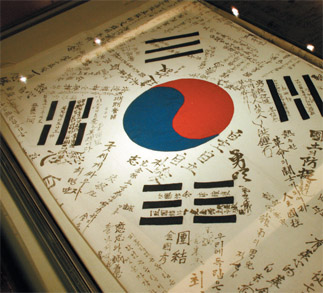 A Korean flag displayed in the provisional government building in Chongqing. By Lee Eun-joo

Yoon killed Yoshinori Shirakawa, a general in the Japanese Imperial Army, and Kawabata Sadaji, the Government Chancellor of Japanese residents in Shanghai.

During a Japanese celebration on the birthday of Emperor Hirohito in 1932 at Hongkew Park in Shanghai, Yoon threw a bomb, instantly killing the two Japanese officials.

China was also under Japanese attack, following the Manchurian military invasion in 1931 of China’s northeastern region. 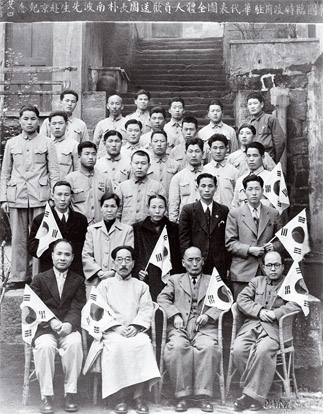 Korean independence fighters who liaised with the Chinese government while in Chongqing. Provided by the Independence Hall

The Korean provisional government was established a month after the March 1st movement in 1919.

Japanese suppression tightened even more and several thousand Korean patriots fled to Shanghai, where they stayed for 14 years.

But after the Hongkew Park incident, the provisional government had to leave.

Independence fighters remained in Chongqing for six years, until the country was freed from Japan.

The last provisional government was most active, according to Li, in unifying different political parties.

“After Korea lost its land, many patriots inside and outside the country shouted for independence,” Li said.

“But they all had different voices in forming a government. National solidarity was hard to find.”

It was crucial for the provisional government in Chongqing to strive for internal unity.

Kim Koo, a dedicated independence fighter and the president of the provisional government while in Chongqing, wrote in his autobiography “Baekbeomilji,” published in 1947:

“There are three things I want to achieve One is to bring families of the independent fighters together. Second is to negotiate with various [Korean] political parties abroad in the United States and Hawaii. Third, I want to raise the issue of unifying political parties.”

Unifying the parties was tough, however, and the mission later failed. Most parties opposed the concept they had different policies.

Apart from efforts to bring parties together, the Chongqing provisional government established the Korean Liberation Army. It helped raise the status of the Korean independence movement abroad.

When the Pacific War broke out in 1941, the Korean army entered the war as one of the allied forces. It dispatched troops for joint operations with the Chinese, English and American armies.

The former Korean army headquarters remains in Yuzhong District in Chongqing, not far from the provisional government. But the building will soon be demolished, as the Chongqing Municipal Government plans to develop the area.

The provisional government’s six years in Chongqing were difficult. Japanese aircraft bombed the area and the office was moved four times.

When provisional government officials were searching for an office, Min Pil-ho, one of the fighters who spoke fluent Chinese, found their fourth building.

The building was a hotel with 70 rooms, owned by a Chinese merchant.

Min thought the building would be perfect as an office since it had many rooms. The owner refused at first but Min pleaded for help.

“Min persuaded him by telling the merchant that when Korea gets liberated, he will be offered business oppportunities,” Li said, based on her research.

The merchant agreed and received 12 million won for the building’s rent.

Following Korea’s liberation, fighters and their families returned. The building was empty until the People’s Republic of China assigned it as public housing to 33 families in 1949.

It was Cho Dong-geol, a retired professor in the history department at Kookmin University who found the provisional government site in Lianhuachi in 1991.

He was on a research trip looking for historic sites.

“At that time, the Chongqing Municipal Government had issued a demolition order,” said Cho.

Instead, the Chongqing government designated the building as cultural site No. 65-38 the following year.

And in 1995, the Korean government restored the building, in celebration of the 50th anniversary of the country’s liberation.

The restoration project cost $1.3 million and was sponsored by private Korean companies.

“The historic significance is more important than the building itself,” Li said.

The building is currently owned and maintained by the culture bureau of the Chongqing government.

A mutual agreement has been made, however, that no unilateral modifications can be made.

“Changing even one picture should be done only after sufficient consultation by both countries.”

Since 1995, the building has been restored five times.

Jia has been looking for more information on the building and more materials to display.

Recently, he visited a library in Nanjing and found some 50,000 items.

“But the Chinese government isn’t sharing the information,” Jia said.

He also mentions the hardships in maintaining the displays at the site.

“There are political and cultural differences in policy between Korea and China,” the curator said.

“We need to get permission from the Chinese government to display words that Korean historians use.”