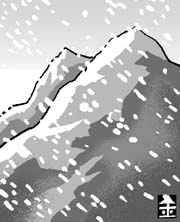 Although the highest, Mount Everest is not the hardest mountain in the world to climb. K2, which is in the Karakoram Mountains, is commonly known as the most treacherous to climb.

At 8,611 meters, K2 is the second highest mountain in the world. It is a barren land far away from the Indian Ocean. In the shape of a steep pyramid, it drops steeply in almost all directions. K2 is also notorious for its severe weather conditions. Its six vast glaciers blow cold air at the midpoint of the mountain and the peak is regularly enveloped by whirling dark clouds.

The number of mountain climbers who have conquered K2 thus far is just slightly above 100; the mountain claimed more than 50 victims.

Korean mountaineer Um Hong-gil said, “Unless you climb the mountain realizing you are risking your life, you will never succeed.” Alpinist Park Young-seok, who lost his colleague on K2 said, “K2 is a mountain that does not allow for any minor mistake.”

British mountain climber Alison Hargreaves died on K2 in 1995 when she was 33 years old. She was hailed as the first woman to climb Everest without supplemental oxygen. She decided to split with her climbing partners, remaining alone as she started to climb the black peak. As she climbed K2, dark, stormy clouds approached her. After a windstorm exceeding 160 kilometers per hour swept over the area, she disappeared. Hargreaves had a 7-year-old son and a 4-year-old daughter. One month later her children came to see their mother, with the help of their father. On the day when they arrived at the base camp, K2 revealed its natural grandeur. “It is so beautiful. I can understand what she felt,” they said.

The day before yesterday, three Korean mountain climbers disappeared. As the vast glacier wall collapsed, their fixed rope was swept away. It reminded us of the tragedy in 1986 when 11 climbers including three Koreans died on their way back down.

Why do young mountaineers climb the mountain at the risk of their lives?

The popular novelist Park Bum-shin’s “Cholatse” hinted at the answer. In the novel, two brothers reach the Cholatse peak next to Mount Everest after going through troubles on the crevassed and steep mountain. What they saw at the peak was only a frosty world wrapped in mist. The novelist asks the question, “If young people have no vision to realize drawing on all their energies, then they will lead a gloomy life. Don’t you think that everyone should envision their own ideal land in their mind?”