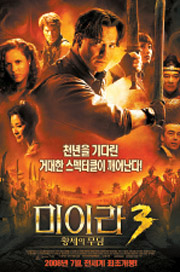 The mummies have conquered Korean theatres this weekend.

Director Rob Cohen’s “The Mummy: Tomb of the Dragon Emperor” is No. 1 at the box office in Korea.

According to the Korean Film Council, The Mummy attracted 246,722 viewers during this weekend (Aug. 1 to 3) in the nation’s 565 theatres.

The number of viewers for this action-adventure film outnumbered Korea’s “The Good, the Bad and the Weird,” released July 17, which still ranks second. 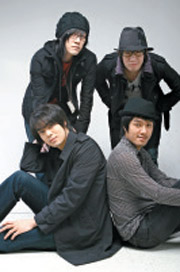 Gwak Kyung-taek’s “Eye for an Eye, Tooth for a Tooth” and Lee Joon-ik’s “Sunny” are both still close behind.

Nell will be the second Korean rock group to perform at the world rock festival. Seotaeji, who recently made a come back, was there in 2001.

Nell will perform at the Park Stage in Osaka on Aug. 10.

The two-day festival is held in Tokyo and Osaka at the same time.

Meanwhile, this year’s lineup includes Coldplay, The Prodigy, Panic At the Disco, OneRepublic and The Verve.

For more information on the festival, visit www.summersonic.com.

Has-beens? Oldies out to prove they can still make the cut

The oldies from 1990s are staging a comeback in the world of singers.

His well-known hits are “Excuse” and “Wrongful Meeting.”

Cool, a trio that represented Korea’s dance song hits of the mid-1990s, came back with a new album, “Cool Returns.”

The group has had a three-year hiatus from the recording studio.

The group disbanded in 2005 and reunited this year.

Balladeer Jo Sung-mo also has plans to release an album before October after he recently got discharged from military service.

These groups have each sold more than 1 million albums, and hope to sell a lot more.