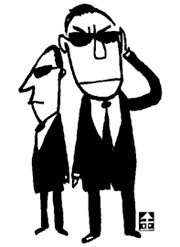 In November 2005, the U.S. presidential bodyguards had a run-in with their Chinese counterparts at Beijing Capital International Airport.

The incident took place when security personnel were waiting for the arrival of President George W. Bush. The Chinese bodyguards wanted the car of then-foreign minister Li Zhaoxing, who was on his way to greet President Bush, to be first in line.

However, the U.S. bodyguards wanted their car in front of the minister’s. The Chinese bodyguards tried to block the Americans’ car, but the Americans sped forward in an attempt to secure a better spot to protect their president.

There was a similar scene at the Asia-Pacific Economic Cooperation summit meeting held in November 2004 in Santiago, Chile. American bodyguards followed President Bush into the dinner hall but were stopped by Chilean policemen. President Bush himself got involved in the fracas, rescued his agents and walked into the hall with his security detail.

Americans might have been impressed by the president’s gesture to his staff, but his actions went against conventional practice: Bodyguards don’t accompany the leader that they protect to official multinational meetings.

The incident demonstrated that fears resulting from the 9/11 attacks had became widespread and people are more sensitive to security issues.

During the Asia?Europe Meeting held in Seoul in October 2000, Korea’s secret agents successfully completed their mission to track the exact locations of 26 world leaders through GPS technology.

Thirteen agencies, including the National Intelligence Service and the Police Agency, worked together to protect the leaders as they carried out their duties. The Korean security team received high praise in diplomatic circles.

Korea is seeing the biggest security operation in its history with President Bush here. The Blue House formed a special bodyguard team to protect the U.S. president and the U.S. bodyguards are considered the world’s best.

Anti-American organizations will stage candlelight rallies but they won’t be able to do any harm.

The Americans won’t be happy to see the protesters but hopefully they will better understand the difficulties that President Lee Myung-bak is facing.