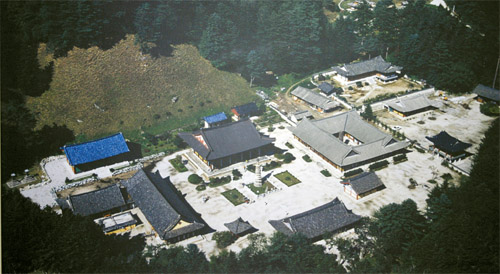 A project at Woljeong Temple in Gangwon aims to enhance the protection of national treasures. Provided by the temple

Koreans know very well that fire can destroy a precious building in minutes.

The vulnerability of cultural properties, in particular wooden ones, and the importance of disaster prevention is self-evident following recent high-profile incidents.

Seoul’s landmark 600-year-old Sungnyemun, or Namdaemun, was destroyed by an arsonist in February this year, and a forest fire destroyed much of Naksan Temple in Gangwon Province in 2005.

These tragic fires have prompted the development of high-tech security systems designed to prevent other cultural properties from meeting similar fiery ends.

They are working on the Woljeong Temple project, a high-tech disaster prevention system that uses a ubiquitous sensor network to anticipate natural, and man-made, disasters.

“The fire at Naksan Temple took place in our province so we have high hopes for the new system,” said In Hyeong-seok of the Gangwon provincial government.

The new system will cost about 715 million won ($703,554) and it will consist of IP cameras, closed-circuit television, servers, sensors and automatic fire extinguishing devices, all communicating with one other through the sensor network.

“We were given just a brief explanation about the system, but in general we feel a lot more assured about our readiness to possible disasters,” said Jeong Gwang-hee of the Woljeong Temple.

“Fire incidents at Naksan Temple and Sungnyemun have warned us how disasters can bring down important cultural properties in just a day,” Jeong added.

The fire station nearest the temple is more than 10 minutes away and there is only limited firefighting equipment on the temple site.

“Considering that it only takes five minutes for an entire building to burn down, the system will play a crucial role,” said In.

The majority of wooden cultural assets in Korea are reckoned to be more than 100 years old. Experts call for extreme caution when handling these items. 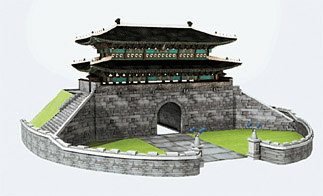 A 3-D image of Sungnyemun, or Namdaemun. Provided by the Culture Technology Institute at Kyungwon University

“The problem is that for all these years, there weren’t comprehensive, unified disaster systems and guidelines for wooden cultural structures,” said Baek Dong-hyeon, professor of fire and disaster protection engineering at Kyungwon University.

“Also religious temples and halls which account for most of wooden cultural buildings are located deep in the woods, restricting firefighters,” Baek said.

Criticized that a disorganized response hindered firefighters at Sungnyemun, the Korean government put forward plans to enhance the disaster prevention infrastructure on the nation’s cultural assets.

In March, the new chief at the Cultural Heritage Administration, Yi Kun-moo, pledged to set up a disaster prevention system at the nation’s wooden cultural properties designated as either national or regular treasures by the end of next year.

In April, the Ministry of Strategy and Finance said it would earmark 14.7 billion won for such a system.

“A partial disaster prevention system can be found at places like Naksan Temple, Mui Temple in South Jeolla and Gaeksa Gate in Gangwon,” said Wu Eun-ho from the administration’s security division. 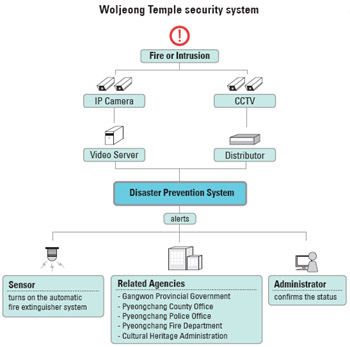 “But there are issues to be settled in terms of budget and administrations,” Wu said.

Considering there are 146 wooden cultural assets in Korea classified as either national or regular treasures, there is a long way to go.

Some steps have been taken, but it is not yet clear whether they will work.

The administration is in the process of evaluating its practicality.

The administration is also working with the National Research Institute of Cultural Heritage to draw up specific regulations on fire-resistant chemicals to be put on wooden cultural structures.

An announcement concerning this plan is expected next month.

Against such a backdrop, there is increased interest in using state-of-the-art technology to protect Korea’s cultural legacy.

It’s thought to be the first system of its kind installed at a Buddhist temple in Korea.

If the system’s sensors detect evidence of fire or earthquake, the two wooden statues in the main building, thought to be among the oldest Buddhist statues in Korea, are whisked down to an underground cell within seconds.

Haein Temple also houses the Tripitaka Koreana, 80,000 woodblocks containing Buddhist writings written nearly 800 years ago. The blocks were designated a national treasure by the Korean government and the temple is a Unesco world heritage site.

Unesco says, “Haeinsa [sic] Temple is one of the most important and most complete corpus of Buddhist doctrinal texts in the world, and is also outstanding for the high aesthetic quality of its workmanship.”

The Culture Technology Institute at Kyungwon University, meanwhile, is working on a 3-D database of the nation’s cultural properties.

Launched last July with funds from the culture ministry, the institute has been processing the 3-D data of cultural structures across the country - mostly stone structures so far.

“Such data can be extremely useful for disaster prevention and restoration of those cultural properties,” said Hwangbo Taeg-keun, the head of the institute and a computer media professor at the university.

“Currently, we have processed the data of 47 stone cultural assets. Our next step will be wooden properties, as they are more delicate and thus difficult to scan,” Hwangbo said.

But the institute hopes the usage of the 3-D data will go beyond disaster prevention and restoration.

The researchers believe they can be used in history education at schools, virtual exhibitions at museums and computer graphics in movies, dramas and games.

The problem, though, is that the 3-D data is not collected in a systematic, centralized way.

“This is a three-year, 600 million won project, but the most ideal scenario would be if the government puts itself at the forefront of a more comprehensive plan with a well-organized, long-term vision,” said Hwangbo.

Another challenge is the interdisciplinary cooperation needed. The experts working on the Woljeong Temple project come from local government, the cultural heritage administration, emergency management and IT as well as regional experts.

“IT experts don’t know much about history and historians have little knowledge about technology,” said Lee Ki-jung, a research professor at Kyungwon University institute.

“The two areas must work closely with an ultimate goal of bringing our history to the present and the future,” Lee said.