Jeong’s new solo LP is her first in 30 years

Jeong’s new solo LP is her first in 30 years 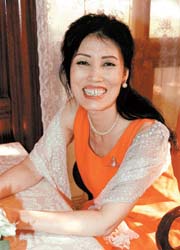 A great song never ages. “At a Flower Garden,” a mellow 1970s song by the veteran female vocalist Jeong Hun-hee, is one of them.

Cho Gwan-woo and John Cameron Mitchell in the musical “Headwig” have both covered the song decades after it was first recorded.

The song reflects the sentimental beauty of a flower garden and it’s an all-time favorite for Koreans who grew up in the 1970s. The lyrics have never gone out of fashion, and nor has Jeong’s voice.

Jeong rose to fame as a national singer after winning several awards at international pop song contests in the 70s, including Chile and Tokyo. 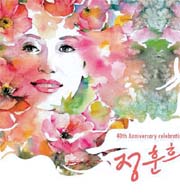 Her album, celebrating 40 years in the music industry, was planned for release last year. But her producer Lee Young-hoon died, delaying the project.

To commemorate his death, Jeong added his title track “When Love Passes” to her new album.

“I couldn’t stop crying during a TV special dedicated to Lee last fall shortly before he died,” she says. “That stays in my mind. I feel like he died because I cried too much during the show.”

The album is also Jeong’s first solo effort in 30 years. Eight out of 13 songs are new.

“I gave up my musical career for a while to support my husband [singer Kim Tae-hwa] and raise children,” she says. “Then in 1989, we released a song together called ‘We are One.’ We could have relied on singing our old hits, but we sang other songs such as soundtracks for TV dramas and asked younger musicians to feature on our albums.”

Jeong is known for her frequent collaborations with younger pop musicians. The Bubble Sisters are featured in her new song “My Music.” Hip-hop group 45rpm sings on “He’s a Fool.”

The most notable song is “No Love,” a duet which she sings with In Su-ni. The two divas blended soul, blues and punk, singing about women betrayed by men, pledging to live happily without them.

“Don’t get us wrong. We both live a happily married life,” she chirps. “I just wanted the song to be trendy and fast if I were going to sing with In Su-ni.”

There are covers of old songs including “At a Flower Garden” and “Fog” in the new album, plus the new number “Deserted Island.”

“I want songs that convey a margin of sadness,” she says. “As a woman, I also want my wrinkles to look beautiful like Audrey Hepburn’s.”