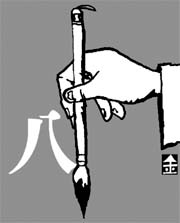 The reason why Westerners regard seven as a lucky number has to do with the Old Testament. The creator made the world in six days and rested on the seventh day. Hence, seven came to mean completion and blessing.

The expression “lucky seven” first appeared in an 1885 Chicago White Stockings Major League baseball game, when a wayward outfield ball was picked up by a strong wind and carried for a home run during the seventh inning. Since then, the expression has become widely used.

Another biblical story gave 13 an unlucky connotation, when Judas, the disciple who betrayed Jesus, sat in the 13th seat during the Last Supper.

If there were 13 participants, including himself, in a meeting, the American president Franklin Roosevelt would call a secretary in to participate. When the Apollo 13 spacecraft that was discharged into space at 13:13 on April 11, 1970 failed to land on the moon due to a mechanical failure, people’s thoughts immediately turned to the curse of the number 13. Fortunately, the spacecraft returned to Earth without anyone being hurt.

Just as many elevators in the West do not have a button for the 13th floor, in the East, there are many without the fourth floor. In Korea, China and Japan, the number four is pronounced respectively, sa, tsu and shi. They all have the same pronunciation as the word for death. Therefore, in these countries there are also no hospital wards with the number four.

The Chinese obsession with the number eight, however, is particular to that country. Many say it is because eight sounds similar and has the same tone as the word meaning a sudden rise of luck.

In the new year’s greeting “Earn a lot of money,” the Chinese characters meaning “sudden rise” and “eight” look similar and are believed to bring fortune. To have a car registration plate with the number eight, the Chinese will pay up to 10 times the usual fee, and to have their children born on Aug. 8, they queue for Caesarean operations.

The Beijing Olympic Games commenced on Aug. 8, 2008 at 8 p.m. The opening ceremony, directed by Chinese filmmaker Zhang Yimou, was full of scenes that showed off to the world the nation’s pride in its culture.

Just as the shape of the number eight becomes wider as it goes down, a nation’s power blossoms as it is disseminated widely throughout the population. What 1.3 billion Chinese wished for in the symbolic number eight was probably not just economic prosperity.