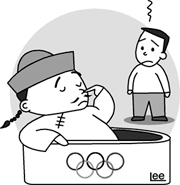 What are the factors that determine how many medals a country wins at the Olympic Games? In 2000, Professor Daniel Johnson of Colorado College in the United States put forth a prediction model that guesses almost the exact number of medals a country will win. There are only five factors: Gross domestic product, population, political structure, climate and home advantage. What is most surprising is that the advantage of competing on home ground is the most influential factor. He says this factor alone can lead to 25 more medals.

Other statistics also back up the theory that playing in one’s own backyard is advantageous. As for the World Cup, there hasn’t been a single occasion when the host country failed to make the top 16, since its beginning in Uruguay in 1930.

Why is playing on home ground so advantageous?

For athletes, they say the main reason lies in the hormone testosterone. This male hormone is correlated with leadership, confidence and offensive tendencies. It is secreted when an animal fights to protect its patch from external predators. The research explains that the same instinct in players on their home turf lifts their performance.

There is also the problem of judges swayed by home supporters, which was highlighted by research published in the May 2002 edition of the New Scientist magazine. After showing tackles from Premier League soccer matches to two groups of umpires, the researchers then had them determine whether the tackles were fair or foul. The results showed that the umpires who heard the home crowd determined 15 percent less fouls by the host team than those umpires who didn’t hear the home supporters.

But the home ground effect should be considered natural as long as it doesn’t violate the spirit of fair play.

However, the sporting spirt that China has exhibited at the Beijing Olympic Games has been disappointing. In the final of the women’s individual archery on Aug. 14, the spectators’ whistling echoed throughout the archery field as soon as Park Sung-hyun strung her bow. Last Saturday, during the baseball match between Germany and China, the umpire called two dubious fouls, but in both cases, China came out winning.

If China accumulates more medals than predicted by the aforementioned prediction model, then it is not due to natural home ground advantage, but its excessive win-at-all-costs instinct.

In the future, when Professor Johnson calculates the advantage of home ground, he should factor in “irrational countries.”