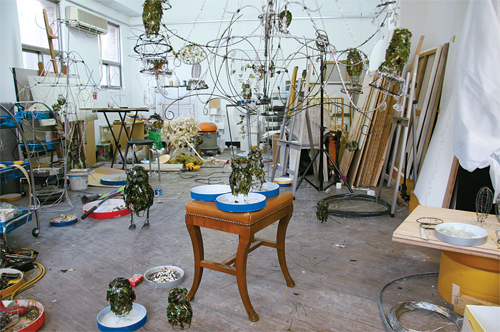 “Insomnia” by Bae Young-whan gives you the jitters. You have to wonder what creates such a reaction.

The show dips into our feelings of anxiety in ways that appear both amiable and repulsive, questioning our construction of fear, melancholy and self-pity. His materials certainly have something to do with the viewer’s reaction.

In the current exhibit, he presents chandeliers in the shape of owls made from the broken glass of soju and wine bottles.

Ominous signs are evident in other works like his dice series which have been carelessly crushed down from human figures. 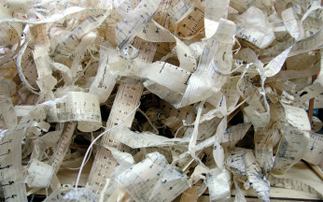 The cut up lyrics from the song “Ave Maria” from the “Insomnia” series. Provided by the organizer

Bae is often described as a post-minjung artist - minjung is the people’s art movement in Korea. For years, he delved into the notion of trauma and oppression by relying on non-traditional materials that speak against the heroic art form.

In “A Man’s Way,” his one-man exhibition in 2005, he challenged the notion of masculinity by laying out visual metaphors of masculine ideals that are deliberately sentimental and insignificant.

In “Perfect Love” from the show, for example, he created an idiosyncratic design of a twin guitar reminiscent of the ’80s sentiment for romance. The piece seems banal but it is imbued with nostalgia.

His other works, which are often layered with dark humor, play with grand themes such as history and love, using personalized metaphors that are sharply political as well.

He produced a series of old Korean pop songs by patching up lyrics using pills, blood, plastic flowers, cotton and razor blades; he played with the cliched lyric of an old pop song to reflect on the apparent gap between our ideals and reality.

His ideas were even more pronounced in his earlier works, which juxtaposed these images with footage from the ’80s democratic uprising from the lyrics of banned songs.

Indeed, his current show articulates our psychological construction of anxiety and trauma, which have become more visceral and richer in content, but minimal in form.

His metaphors still resonate, because they materialize our fears and regrets for our lost naivete that are still apparent in the lives of everyday Koreans.

“Insomnia” by Bae Young-whan opens tomorrow, and runs through Sept. 20 at PKM Gallery in Jongno, central Seoul. The gallery is open from Monday to Saturday from 11 a.m. to 6 p.m.