Statue of Buddhas could be the next national treasure

Statue of Buddhas could be the next national treasure 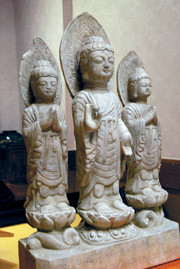 The Statue of Standing Tri-Loka Buddhas was unveiled yesterday in Seoul. The statue was found in Gyeongju in 1965. By Baik Sung-ho

A Buddhist statue that experts consider equivalent to a national treasure is finally seeing the light of day - 1,300 years after its creation and more than 40 years after its discovery.
The statue was unveiled Thursday at a restaurant in downtown Seoul to a group of cultural property experts by Yang Eun-yong, a professor of Buddhist history at Won-kwang University.
Yang has been studying the discovery for the last six years.
“The statue’s inscription has the exact date of manufacture as it reads ‘On April 5 in the third year of Kai Yuan of Tang Dynasty, Yoo-Geo made a stone statue of Tri-Loka Buddhas for respectful father,’ meaning it was made in 715 A.D.
“This helped me ascertain its authenticity as well as study the style of Buddhist statues from that period,” Yang said.
The official name of the statue is the Statue of Standing Tri-Loka Buddhas in One Stone of Unified Silla.
The 42.6-centimeter (16.8-inch) high carving has three standing marble Buddha images representing the past, present and future existences.
The middle one holds a yeouiju (dragon ball) in its right hand.

“Buddha statues made of marble are scarce in Korea. The recent find is typical Korean Buddhist as the three Buddhas all have protruding eyes and gentle and friendly smiles on their faces. It stands in comparison with a national treasure,” said Jeong Young-ho, the head curator of the Dankook University Museum.
“The stains still in every corner of the statue prove that it is age-old. And its typical Three Kingdoms age style and handwritten inscription tell us it can’t be a fake,” said Jeong Myung-ho, a former expert advisor to the Cultural Heritage Administration.
The statue was found in 1965 by a farmer growing vegetables next to the road from Bulguksa, a famous temple in Gyeongju, to Seokguram Grotto, which contains a 3.5 meter (11.5 feet) granite carving of Buddha.
But the farmer kept the discovery private. After his death, the statue was left to his son.
“I came upon this statue by chance and when I first saw it, it moved me to tears. Then the owner suggested that I study it. Now that it is seeing the light of day, I find the six years I spent studying it to have been worthwhile,” said Yang.