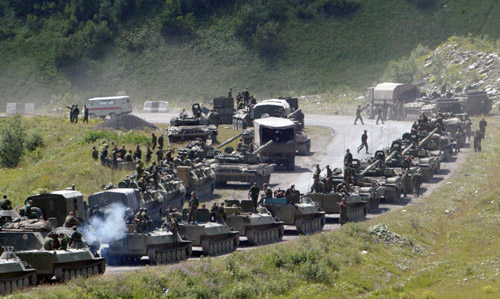 A column of Russian armored vehicles seen on their way to the South Ossetian capital Tskhinvali somewhere in the Georgian breakaway region of South Ossetia in early August. [AP]

Russia is without a doubt the winner in the recent conflict in the South Caucasus.

It has reinforced control over the secessionist regions of South Ossetia and Abkhazia. Its army has defeated the Georgians, a welcome result for Moscow after years of humiliation from Afghanistan to Chechnya. For sure the Georgian army was not powerful, but being equipped by the United States increased Moscow’s sense of satisfaction.

So Russia is back and with strength on the international stage. Far off seem the times when the country was unable to defend its views on strategic matters with its economy in tatters.

It has looked on powerlessly as NATO grew, the Kosovo war took place, the United States tried to reshape the Middle East and Western troops dug in around Central Asia.

The strategic partnership between Russia and NATO in 2002 has been wrongly interpreted as an acceptance of U.S. strategic supremacy and Russia’s renunciation of specific national interests.

Vladimir Putin has re-established Moscow’s authority with strength and brutality, both on the national and international stage.

The rise of energy prices - partly due to the Iraqi war - has replenished state coffers, and Russia is no longer a spectator but an important and active player in international affairs.

The loser is Georgian president Mikheil Saakashvili. He made a number of serious miscalculations: overestimating the amount of support that the United States would commit and underestimating Russian resolve.

Did he believe that Russia would let him take over South Ossetia (which declared independence from Georgia in the early 1990s) without any reaction?

It would have meant that Russia is neither a world nor a regional power.

Saakashvili is popular in Washington. Bush is eager to help him in his political tug-of-war with Moscow, to equip his army and to try to ensure its admission to NATO, but the U.S. president is certainly not ready to open a new military front in addition to the Afghan and Iraqi ones.

If Saakashvili tried to force Bush’s hand by launching a military attack against Russia, he made the biggest mistake of his life.

He will have to endure the indefinite loss of South Ossetia and Abkhazia to another country instead.

The conflict between Georgia and Russia is the last nail in the coffin of the unipolar world thesis coffin. Georgia was a Washington ally, and the United States was unable to help.

Washington has been vocal in its criticism, but its voice hasn’t had any impact on the ground.

The hyperpower was powerless in front of a major strategic event.

President Bush cannot even compensate this strategic defeat by claiming a moral or ideological victory.

His call to respect Georgian sovereignty and territorial integrity seems odd given that he launched the Iraqi war and supported the Israeli war against Lebanon.

It is difficult to understand why it is acceptable for Kosovo to claim the right to secede but not South Ossetia or Abkhazia. Why would Georgia deserve territorial integrity but not Serbia?

But we do not really misunderstand the situation. We are not witnessing the rebirth of the U.S.S.R. or another Cold War.

We are not watching two antagonists with allies all around the world fighting an ideological war to the death.

Rather, we are witnessing the return of power policies where each power tries to defend its national interest as well as it can and with as much show of strength.

Westerners must now accept that Russians have their own national interests to consider, which may not converge with Western plans.

If the West wants to see its interests prevail, it must first make a realistic analysis of the strategic situation.

The West must not delude itself. If it wants to see the Russian leaders adopt a responsible role in international affairs, it has to cease seeing Russia as a weak and defeated power.

If Westerners want to see their values prevail, they must start by respecting their own values and avoid applying them selectively.

These actions are vilified in some cases and approved in others, depending whether they are undertaken by an ally or a favorite, or by a rival.


*The writer is director of the Institute for International and Strategic Relations in Paris.