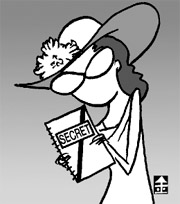 One of the most famous spies of the 20th century was Rikhard Zorge, who transferred secret information to the Soviet Union while working as a correspondent for a German newspaper in Japan.

Zorge excelled as a spy. He was also an attractive man, constantly surrounded by women. However, he wouldn’t have been so popular with today’s feminists. He once said: “If you are not a man, it is difficult to become a spy. It requires ample knowledge and intelligence. As women do not have any political knowledge, they are useless. I had relationships with women of high class, but they did not understand what their husbands were saying. They were completely useless.”

Contrary to Zorge’s statement, there were many notable women spies. The most famous female spy is a Dutch woman, Mata Hari, who worked for the German Intelligence Service. She lived as an exotic dancer in Paris and had relationships with many high-ranking officers of the Allied Forces. Although it is not clear whether the information she gathered was as valuable as that of Zorge, her access to information sources was distinguishable.

Yoshiko Kawashima was the Mata Hari of Asia. Born as the princess of the Qing Dynasty that had collapsed, she was adopted by a Japanese family at an early age, received a Japanese education and worked behind the scenes for the establishment of Manchuria, a puppet state of Japanese imperialism. Like Hari, she also had numerous romantic liaisons with men.

Kim Su-im was a Korean who followed in Hari’s footsteps. She was an intellectual and fluent in English. She lived with American officers when the U.S. military administered Korea to help the then-communist party in Korea. She was executed right before the break of the Korean War for having spied.

It is shocking to hear that one officer did not report her, despite knowing she was working for the North, because he loved her.

Shall we find comfort in the fact that she was not such a skillful spy? According to the investigation so far, she was not able to approach high-ranking officers and the information she did send to North Korea was not so important.

But this does not mean that we can stop worrying?

It is frightening even to imagine what could have happened had a female spy with Zorge’s skill and Mata Hari’s looks toyed with our military.