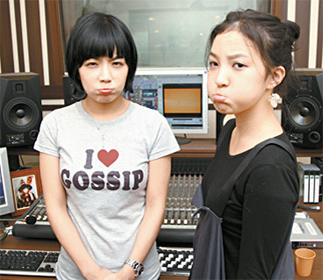 The end of the world is nigh.

At least, that’s the impression I get on the subway every morning.

Maybe (and hopefully) it’s a feeling you get just on the Euljiro loop on the No. 2 line, but many of my fellow passengers seem to wear this angry look, as if they have no life.

The books they read mostly carry saccharine titles like “How I Turned 6 Million Won Into 600 Million” - I have to admit that I was also smitten by this title for a moment - or “The Royal Road to Be a Real Investment Guru.”

There are also many elderly people wearing a fierce look, who ransack every nook and cranny of the subway cars for discarded newspapers, which they sell for a few dollars to wastepaper dealers.

Well, nobody can blame them. We’re all tortured enough by news of the plummeting stock market and surging prices. The Olympics helped drown our worries, but the Games are over. In this day and age, it seems people can’t afford to be decent. Being good appears to be a boring luxury, especially when you have to cut down on your living expenses to make your mortgage repayments.

Fed up with being middle class, there are people out there in Korea who fancy living the life of Paris Hilton, with enough cash to splash.

The fantasy about spoiled girls has led to the birth of the reality show “Bad Girls’ Diary” on the cable channel O’live.

Airing Thursdays at midnight, this show comes in a chain of reruns and it’s one of the most popular shows of the channel. Launched last September, Bad Girls’ Diary is already into a third season. After airing the regular 12 episodes, producers decided to shoot four more to meet the demands of the audiences.

The show defines a bad girl as a “woman who has her own set of principles and thoughts” and a “woman who everyone wants to model themselves after.”

The show’s formula is simple. There are two “bad girls” who have money to burn courtesy of their parents. The camera follows the two girls as they go about a typical day, showing them splurging on a luxury lifestyle. In the latest season, a show featured two 20-somethings, Amy and Bonnie, who lived abroad in Singapore and the United States. They go horseback riding, clubbing, yachting and shopping with a purse thick with 1-million-won (about $890) checks.

“We know what we want and we know what we are doing,” the two girls said. The producers don’t forget to remind viewers of the luxury factor, as they keep running subtitles pointing out the prices of the services and products that these girls enjoy.

The twist in the third season is that the producers adopt a kind of taming-of-the-shrew approach, trying to discipline the bad girls to be punctual and polite to each other.

The girls even participated in volunteer work, holding flea markets for charity and working on construction sites for Habitat for Humanity. Strangely, however, the episodes that showed these bad girls doing good deeds failed to work, as they were not as fun as the ones when they came across as spoiled brats.

To be honest, the image that sprang to mind was of Paris Hilton dressed up rather awkwardly as Florence Nightingale.

It just goes to show what people want from TV. Viewers rushed to online bulletin boards after the bad girls tried to be good and complained. They wanted the bratty bad girls back.

People sat at home want to see a bit of spice and probably fantasize about these two girls, pointing out their faults but at the same time wishing they could lead such a lifestyle, even for just a day.

So while the girls savor their lives, maybe I should get myself a copy of the book, “How I Turned 6 Million Into 600 Million.” Maybe then I can be free of the angry eyes and fierce elbowing on the Euljiro loop.