Journey through the center of Seoul

Journey through the center of Seoul 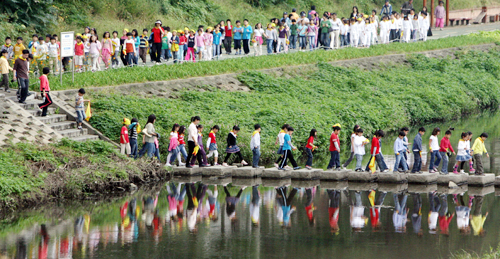 Korea usually enjoys balmy weather at the beginning of autumn. The leaves on the trees turn yellow and brown and the trees and shrubs blaze with autumnal tints.

This two-day festival, which takes place from Sept. 27 to 28, offers three walks for people of all ages and levels of fitness.

The organizers describe the nation’s capital, in particular the central part, as an ideal venue for walkers. 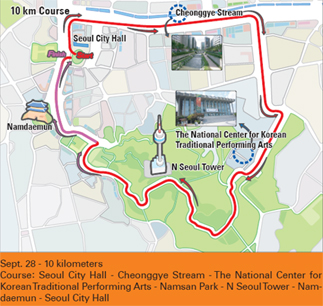 You not only get a decent cardiovascular workout, you also get to see historic parts of Seoul, learn about Korean culture and take in some of the greener neighborhoods in the city such as Seoul Forest and Namsan Park.

The 30-kilometer (18.6 miles) course goes from downtown Seoul to the Han River and back to the city center. Only experienced, long-distance walkers should sign up for this walk, organizers say. 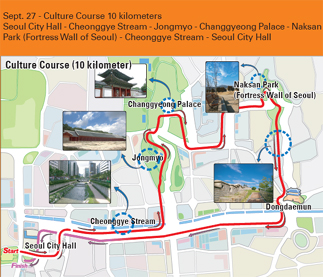 The courses also include two other major attractions in downtown Seoul: Cheonggye Stream, the nearly 6-kilometer-long urban stream flowing east to west through downtown Seoul, and N Seoul Tower in Namsan Park, which is covered with more than 60 species of trees and plants.

Only walkers on the 30-kilometer walk will pass through Seoul’s public park, Seoul Forest, a 1.16-square-kilometer (0.44-square-mile) haven of greenery, landscaped gardens and other areas of recreation. Seoul Forest is located near Ttukseom Station, subway line No. 2, and Seongsu Bridge.

Then there are two 10-kilometer strolls through the heart of Seoul, which should be comfortable enough for walkers of all ages, from young kids to senior citizens, organizers add.

The regular course takes in green areas such as Namsan Park and places of interest such as Namdaemun Market, while the second 10-kilometer walk, called “Walking in Korean Culture,” emphasizes historic spots such as Changgyeong Palace, Jongmyo, and Naksan Park, known as the Fortress Wall of Seoul.

This culture walk is particularly suitable for non-Koreans who are less familiar with Korean culture and history and want to find out more. 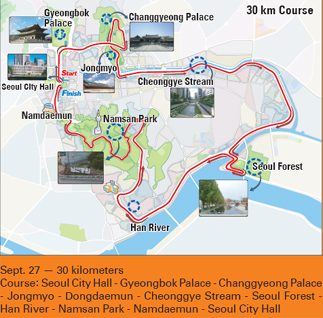 The end point of each walk is Seoul Plaza at City Hall where there will be a festive party.
.

There will be a B-boy performance, cheerleaders from the LG Twins baseball team, face painting and a photo zone.

“This walking festival will promote the health of citizens as well as contribute to the unity of the people. Also, it will be a great chance to explore every corner of central Seoul,” said Kang Sin-gwon, a Seoul official with the city government.

“We will develop the walking festival into an annual event representing Seoul,” Kang added.

The mayor of Seoul, Oh Se-hoon, will be taking part in the walk around Seoul’s central district.

The organizers say that the event will go ahead even if it rains and that all registered participants will be given a T-shirt souvenir at Seoul City Hall.

The organizers are doing their best to provide adequate medical care and refreshments.

There will be 15,000 bottles of water available and hundreds of volunteers dispatched to the sites where the walking events take place.

Medical staff and three ambulances will be on standby in case of emergency.

“The host organizations now welcome people to the first international walking event, which aims to celebrate the landscape in and around Seoul as well as strengthen the unity between different families and cultures,” Kang said.

More than 5,000 people have already registered, according to the organizers.

Registration starts at 9 a.m. on both days.

The 30-kilometer walk officially begins at 10 a.m. at Seoul City Hall on Sept. 27. A maximum of 1,000 participants will be allowed to take part, and will be accepted on a first-come, first-served basis.

This 10-kilometer regular walk officially starts at 10 a.m. on Sept. 28, also at Seoul City Hall, and a maximum of 10,000 can sign up on a first-come, first-served basis.

The “Walking in Korean Culture” event begins shortly after the start of the 30-kilometer walk course on Sept. 27. It has a capacity of 1,000 persons, on a first-come, first-served basis.

Organizers say the first day walks will end at around 5 p.m., while the second day’s will end about 1 p.m.


To take part in this event, you need to register online. The process is simple. The host organizations have launched a Korean and English language Web site.

Individual participants need to go to www.hiseoulwalking.co.kr/asp/07_eng/eng_03.asp in order to complete the registration form.

To participate in the race as a group, people need to download the application form on the homepage and then send it by e-mail to walking@joongang.co.kr.

It’s free to take part and the closing date for entry is Sept. 24.

For further information, contact the organizing committee at (02) 751-9680 or walking@joongang.co.kr.