Art and heart in the park

Art and heart in the park 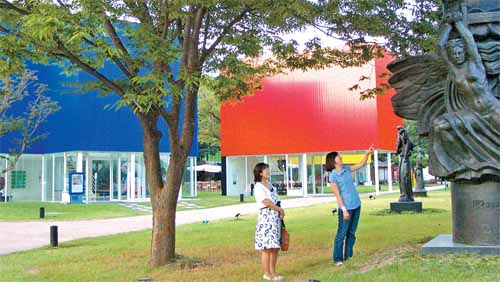 
A large bronze sculpture about twice the size of an average man greets you as you enter Jangheung Art Park in Yangju City, Gyeonggi Province.

“L’Epopee Polonaise,” a 1917 work by Antoine Bourdelle (1861-1929), one of France’s most influential contemporary sculptors, portrays a masculine-looking angel holding high the sword of justice in the name of Polish independence.

From top to above, wall painting, rock-paper-scissors chairs and a button couch at Donghwa Market in Dongdaemun. [JoongAng Ilbo]

“We felt it was important to host famous works from home and abroad in order to establish our park as one of the world’s leading sculpture parks,” said Bae Su-cheol, the president of Jangheung Art Park, which opened in May 2006. “It wasn’t easy. But with support from our acquaintances, we were able to exhibit this work by Bourdelle.” 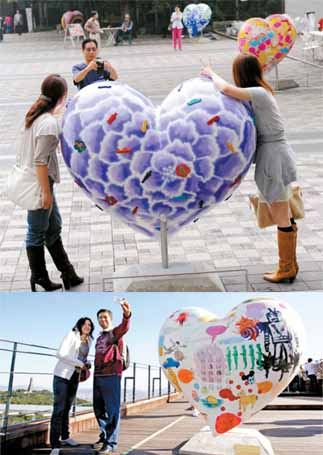 The “Love Heart Wings” project showcases works of art inspired by the idea of “heart” across the city as part of the Seoul city government’s efforts to use the city as a canvas and support artists. [JoongAng Ilbo]

In the 1980s, Jangheung resort was where young couples would go on dates. With the opening of the Total Art Museum, the area became more popular. It was the country’s first private art gallery and about 20 antique-style cafes and bars opened nearby, adding to the arty atmosphere.

But the romantic mood soon faded when love motels sprung up and the area become popular more for its karaoke joints and bars than its contemporary art.

Three exhibition halls and restaurant were built. Six other galleries were positioned around the outdoor sculpture park. A children’s museum and a performance hall were set up, as well.

Today, about 1,000 people visit the park every weekend.

A thriving artist community is also expanding. The organizers envisage a place where talented artists can nurture their ideas, similar to artist communities overseas such as the International Arts City in Paris and 798 Art Zone, or Dashanzi Art District, in Beijing.

In addition, Gana bought two nearby six-story buildings that used to house love motels and restaurants and transformed them into ateliers.

A total of 63 local and international artists have moved in with the support from either corporate or individual patrons.

Gana has recently purchased one more building and is in the process of reconstructing it.

Yangju city government also plans to buy a building and use it to house small studios.

To show its support, the Ministry of Knowledge Economy recently designated a section of Jangheung, which includes the Jangheung Art Park, as a special culture and art zone.

The 37 billion won ($26.7 million) project aims to establish more ateliers and museums in the region to create an art city where old and new cultures exist in harmony.

In addition to these designated art villages, Koreans can expect to run into pieces of art in the most unlikely places across the country.

“The heart, which beats fast at the word ‘love,’ is the source of art,” said Lee Eun-hwa, the artistic director of the exhibition, which ended Oct. 9.

“The aim of this project was to help people examine love and its significance in their lives,” Lee said.

One of the exhibits was “I Love Milk” by Hwang Hyeon-ho, which presented a big white heart covered with hundreds of baby pacifiers.

“I wanted to explore the concept of hunger. This issue has been in the news recently following the Chinese powdered milk and melamine scandal,” the artist explained.

On a more abstract note, “Heart Sandbag” by Lee Gi-il compared heartthrobbing love to a sandbag, “Lucky Dream” by Choi Seok-un sees love as colorful, happy pigs kissing each other, while “Heart Diary” by Lee Geon-hee is a patchwork of art projects created by visually impaired children.

“The exhibition was supported by the Seoul city government as part of its efforts to transform the city into an art gallery,” said Lee.

“It wasn’t an easy task asking artists for artworks around a unified theme, but we thought the romantic atmosphere many people associate with Mount Namsan and this exhibition of hearts were a perfect match.”

The exhibition moved to Jamsil Olympic Stadium yesterday, where the works will go up for auction. The profits donated to the less privileged.

Another venue that has benefited from Seoul city government’s recent art project is Donghwa Market in the Dongdaemun area of central Seoul.

From the outside, the 40-year-old building looks like any other old, rundown structure.

But once you go in, you know you’re in no ordinary mall.

In the hallway leading to the stairway is a five-meter (16.4-feet) high chair dotted with tens of colorful buttons and spangles.

The installation is by public art planning company Planning Mido, which took about a year to set up at Donghwa Market with the support of the Seoul city government.

The installations include a wall painting depicting the faces of merchants at the market, chairs with hands at the end of the armrest depicting the game of rock, paper, scissors, and a large button-shaped couch set up on the rooftop of the building.

If you wander around taking pictures at Donghwa Market, chances are you will be approached by a security guard.

The extra vigilance comes at the request of the artisans at work in the market. Many of the merchants retain a special expertise and know-how in making clothes, and so they are extremely concerned about security.

The 11 artists who participated in the Planning Mido project were so impressed by the guard Park Su-gil, 57, that they drew his portrait on a door on the third floor. Park is now a celebrity in the building.

“Frankly, we didn’t see an increase in the number of customers,” said Kim Jin-su, 63, who has been in the embroidery business at the market for 30 years. “But there are certainly more people here, and that breathes in more energy.”

Planning Mido based their project around a make-believe tale about a giant who loves collecting things. According to their story, the giant hunts around for the buttons, zippers, threads, beads and ribbons and hoards that in the market place.

Little people who live there began to make clothes using the giant’s secret store of clothing accessories and their products are the ones we see on the stalls around the market.

“Artwork at Donghwa Market conveys the spirit of sharing and harmony,” said Ra Yun-ju, a manager at Planning Mido.

The company is running a similar project at another market in Seoul and will reveal more information at the start of next year.