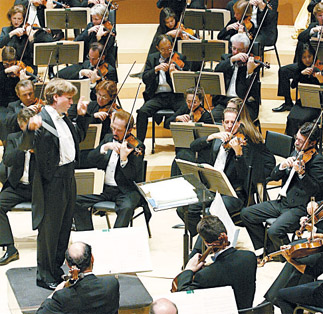 The LA Philharmonic will perform here for the first time since 1982, accompanied by violinist Sarah Chang. Provided by the organizer

The Los Angeles Philharmonic and its music director Esa-Pekka Salonen have been making music and history together for the last 17 years.

Unfortunately, Korean audiences haven’t been able to experience this fruitful partnership, until now.

The Philharmonic has performed just once in Korea, in 1982, before Salonen appeared on the scene.

And this will be Salonen’s professional debut on a Korean stage. 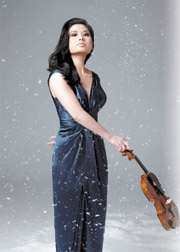 The two will give a concert this weekend, a major slice of luck for fans of classical music here as 2008-09 is the final season the music director will be in charge of the Californian orchestra.

After April 19 next year, Salonen will take up a new post as principal conductor of the London Philharmonia.

Interestingly, conducting was never Salonen’s first choice when he was training.

Born in Finland, he studied the horn, composition and conducting at the Sibelius Academy in Helsinki.

He substituted for Michael Tilson Thomas at the LA Philharmonic and was so impressive he was asked him to be the principle conductor in 1992 at the age of 35.

Since then Salonen’s adventurous, forward and progressive spirit has brought big changes to the LA Philharmonic, presenting a new role model for the 21st century orchestra.

Besides performing traditional repertoires under Salonen’s trademark analytic, precise leadership, the LA Philharmonic also sought to reach out to a more general audience, premiering more modern pieces not just at its Walt Disney Concert Hall but also at schools, churches and community centers.

At the upcoming Seoul concert, the orchestra’s repertoire will include Stravinsky’s Fireworks as well as Sibelius’ Violin Concerto, which will be performed with Korean violinist Sarah Chang, who has often performed with the LA Philharmonic.