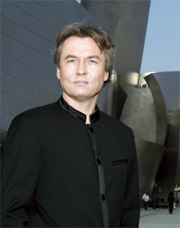 Esa-Pekka Salonen will leave the LA Philharmonic next April to take up a new post as principal conductor of London’s Philharmonia. Provided by the organizer

Q. Do you think that the LA Philharmonic has a color all of its own? How would you describe it?

A. Los Angeles is a place where so many different cultures come together. There’s no native Los Angeles culture in the sense there’s native Viennese or German culture or whatever. Everything they have has been brought to LA from somewhere else, including myself. Therefore, the idea for the orchestra should be something that acknowledges the fact that there is a very strong European past but also the present in LA. I think the idea of fusion that different things coming together makes sense in that environment. It should be this kind of openness to the new and unusual, and not being limited to a certain kind of tradition.

I understand that you have composed and performed many works. How is composing different from conducting and what is its greatest appeal?

Most composers have to do something else, like teaching or conducting, for practical reasons. I’m not alone in the idea that I have to divide my time. The problem is that people sometimes feel that if you do more than one thing you can’t be serious. It’s like a suspicious thing that somebody is trying to be two different things and that has to do with the idea of specialization in our time. But if you think of the past, most musicians in the past did several things. This idea of a musician being allowed to do only one thing is very new. I think the way I see myself is a musician and I work within music in different ways.

What music are you concentrating on the most this season?

Stravinsky, Ravel and Debussy are very central composers in my life and Stravinsky was a Los Angeles-based composer, of course, for the longest part of his life. So I thought that as this is my last tour with the LA Philharmonic, why not play music that is absolutely central for me.