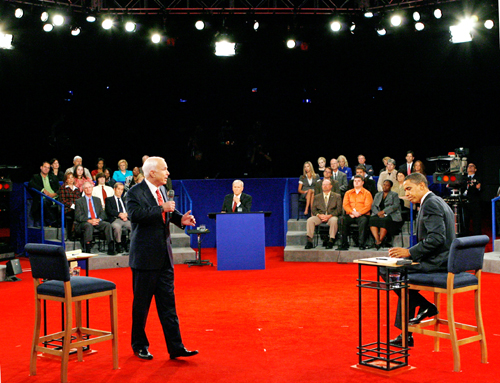 The second presidential candidates’ debate took place last Thursday in Nashville, Tenn., in the midst of increasingly hostile attacks by both the McCain and Obama campaigns. The Obama camp has just released a documentary alleging a close relationship between John McCain and Charles Keating, a principal figure in the savings and loan scandals of the late 1980s.

Republican vice presidential nominee Sarah Palin [and Republican ads] recently launched a sustained attack in speeches alleging Barack Obama has a close relationship with Bill Ayers, a University of Illinois professor who was a leader in the violent 1960s radical group the Weather Underground.

While there were testy exchanges between the two candidates, the overall tone was polite. Each man pursued a reasonable style, with relatively specific policy examples, that characterized the first debate. The town hall meeting format arguably encourages a more moderate tone. The studio audience was not a partisan crowd. Questions submitted by them as well as over the Internet addressed relatively specific policy concerns, not party hot buttons.

As in previous debates, there was relatively little discussion of foreign policy beyond concern with terrorism. North Korea regularly is mentioned as a prime example of a nuclear menace, rogue regime and supporter of terrorism.

However, and in contrast to American candidate debates from 1960 through the 1980s, there is a striking lack of detail regarding alliance matters.

From the outset, there was emphasis on the current financial crisis, which began in the United States credit markets and has steadily become global. The dramatic slump in equities values on Wall Street provided a dramatic backdrop. Obama stressed that “you need someone who is working for you - for the middle class,” and cited a highly publicized resort trip by AIG executives just after Congressional passage of the financial rescue bill.

Later in the debate, he accused McCain of promoting tax favoritism for the rich, including “Fortune 500 CEOs”, and advocating greater deregulation of financial markets even after the current crisis was looming. Obama declared that our system of 20th century regulations is insufficient for the 21st century.

McCain several times denounced “greed and excess” as well as “cronyism” in Washington as well as Wall Street. He stressed his maverick reputation and opposition to special interests, including lobbyists. He also accused Obama of close association with representatives of failed Fannie Mae and Freddie Mac, the federal home loan agencies. Obama replied that financial lobbyists are prominent in the McCain campaign.

Two other topics emerged prominently early in the debate, energy independence and health care. Obama declared that we should make a commitment to energy self-sufficiency in ten years, along the lines of John F. Kennedy’s dramatic 1961 pledge to make a successful manned voyage to the Moon within the decade. In energy as in other areas, McCain argued his practical experience provides an edge to succeed in policy initiatives.

Adequate health care was described by McCain as a “responsibility” and by Obama as a “right.” McCain emphasized the importance of providing Americans with maximum freedom of choice to select plans best suited to them, while Obama stressed the benefits of providing effective coverage to the maximum number of people.

Turning to foreign policy, moderator Tom Brokaw of NBC asked each candidate to outline his “doctrine.” McCain underscored his direct military, as well as foreign policy experience, contrasting himself to Obama and accusing his opponent of calling for “a dangerous” withdrawal from Iraq.

In a dramatic moment, McCain stated regarding Osama bin Laden that “I’ll get him no matter what ... I know how to get him.”

Obama stressed working through allies, and cited genocide in Darfur as strongly justifying collective military intervention. He emphasized that Iraq was not involved in the 9/11 terrorist attacks. Obama emphatically accused McCain of irresponsibility in threatening the use of force against Iran and North Korea.

Obama has been opening a widening lead over McCain in public opinion polls. Presidential debates, including the legendary Kennedy-Nixon encounters of 1960, do not usually dramatically affect opinion trends.

The third and final 2008 presidential debate will take place Oct. 15. at Hofstra University in New York.


*The writer is Clausen Distinguished Professor at Carthage College in Wisconsin, U.S.A. He can be reached at acyr@carthage.edu.