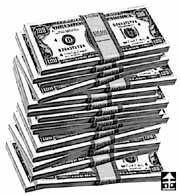 In 1999, the United States government began to issue commemorative coins of each of its 50 states, which became the most successful coinage program in history. The U.S. Mint issued five different 25 cent coins with designs that symbolized a particular state each year.

The quarters put into circulation at the face value of the coin were extremely popular. The U.S. Mint calculated that about half of the U.S. population collected these coins. All 50 coins went into circulation this year.

This makes us ask: “How much did the U.S. government earn from issuing these coins?” It costs less than five cents to produce a 25 cent commemorative coin. As of this year, revenue from the coins has already amounted to $4.6 billion.

The profit that the government or the central bank earns from issuing currency is called seigniorage. If coins, like the commemorative state quarters, are collected and are not circulated in the market, the difference between the face value of the coin and the cost of issuing it becomes seigniorage.

However, the calculation is different when bank notes circulated in the market become worn out and are discarded. The financial capital’s profit earned by the central bank issuing and circulating cash becomes seigniorage.

The total annual seigniorage is calculated by subtracting the cost of issuing and circulating the cash from the market interest, multiplied by the amount of cash currently in circulation.

Seigniorage is also called “inflation tax.” If more cash is supplied for circulation and brings about inflation, the real value of the cash diminishes and that wealth is transferred to the central bank. If this happens only domestically, then the total amount of wealth does not change. However, the U.S. dollar is different as it’s the key currency of international financial transactions.

If the U.S. issues more cash, the resulting drop in the real value of the world’s holdings of the dollar due to inflation is transferred to the U.S. Federal Reserve.

The seigniorage that the U.S. has earned since the dollar became the international currency after World War II must be astronomical.

On Monday, the U.S. and European central banks declared they would release unlimited amounts of U.S. dollars in order to supply flexibility to financial corporations. The U.S. Federal Reserve intends to issue enough dollars as necessary and unlimitedly expand the currency exchange ceiling between central banks. We envy the seigniorage effect and the international currency, the U.S. dollar.