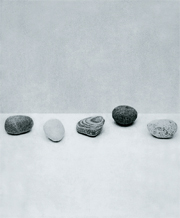 “Stones” series at Gallery Kong. Provided by the organizer

In her recent still-life photographs of pebbles at Gallery Kong, Kim Soo-kang made a bold decision, a dramatic leap from her previous works: She added a horizon onto her background.

The line, separating the foreground from the background, starkly reflected a turning point in the artist’s philosophy, adding gravity and a sense of reality to her work.

For years, Kim’s black-and-white photographs walked a fine line between abstraction and realism, photography and print.

She uses a rare print technique called gum bichromate, which makes photos look like a drawing or a print. The scale of her fragile objects - buttons, egg shells and rice bowls - was often blown out of proportion to create a surreal look.

The gradation of gray on the gum print lent a vague texture, making the image look as if it’s fading into the white background.

Without the horizon, which gives a sense of perspective to the picture, Kim’s objects often came across as abstract and surreal, almost as if they are floating in an empty space.

Yet upon closer inspection, the objects are real, the shadows underneath proving their physical presence.

Then in recent work, the artist has stretched further into realism. For example, in “Stones,” the artist’s latest exhibition, Kim used objects that she had collected over the last two years, experimenting with their composition.

She moved the stones away from the center of the page and tilted the horizon. Each one had a different shape and pattern, but most no bigger than a thumbnail.

The artist arranges the stones in relation to one another, searching for balance and harmony. Overall, the works resonate as a test of composition, but conceptually as well, each piece carefully reflects the artist’s nonintrusive mentality shown in her previous still-life works.

Kim first began her series of “Unimportant Stories” in gum print in 1997 when she was studying art in the United States.

“Her work has gotten more minimal over the past 10 years,” says Kong Keun-hye, the gallery director.

“It’s like the essence of art posed by artists like Lee U-fan [a Korean painter] where he started out creating very complex forms and them later used single lines and dots,” Kong added.

She collected objects that were rarely given attention to but that she felt were meaningful, like a salt shaker, stamps, ruler and pencils.

The artist’s warmth is present even in the sense of stillness of the objects.

“Stones” by Kim Soo-kang runs at Gallery Kong through Nov. 9.