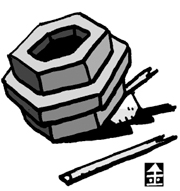 In Korean political circles, a common joke among men is, “What do politicians and a wife have in common? They can both talk their way out of anything.”

In Washington, politicians are well known for their use of euphemisms to distract public opinion. An American soldier’s suicide in Iraq is said to be an act of “self-injury,” and the evacuation of American troops is expressed as an “reallocation.”

The investigative body of the United States Congress reported that they had “discovered a task,” rather than “exposed corruption,” and the word “starvation” has been replaced in Washington with the ambiguous “food insecurity.”

Even a politician who is forced to step down due to a scandal will cheerfully comment, “Now, I will have more time to spend with my family.”

Even Wall Street seems to follow in the steps of Washington politicians in its talent for manipulation of ornate rhetoric. The word “debt” originated from the Latin “debitum,” and The Lord’s Prayer uses “our trespasses” to convey that it is a “debt that should be repaid.” Wall Street, however, has replaced debt with the more positive “leverage.”

American investment banks pushed the financial boundaries so carelessly that their leverage broke.

The same may be said of the word “bailout” to refer to rescue financing, which originated from a pilot’s act of making an emergency parachute deployment.

These days, we feel that Americans are too heedless and irresponsible. It is likely that they see a safe escape, while we see a sense of urgency against bankruptcy.

Over the last 10 years, Warren Buffett has warned that “Derivative financial products are a weapon of mass destruction,” reflecting on his own failures. When he bought up General Re Corporation, a holding company for global reinsurance, he looked to make a killing, but in fact, lost $409 million.

However, no one heeded Buffett’s warnings. Wall Street has been too absorbed in rosy catchphrases, such as “no guts, no glory.”

Recently, a new trend has emerged as American journalists try to burst the doublespeak bubble.

The American newsmagazine Newsweek advised its readers that the key to future survival was to lose the wordplay.

Simple sentences, like “Let’s keep our eyes open,” “There is no such thing as a free lunch,” “We need to disengage ourselves from debt and encourage savings,” draw our attention.

It is time to join efforts to tighten our belts to save against a rainy day.