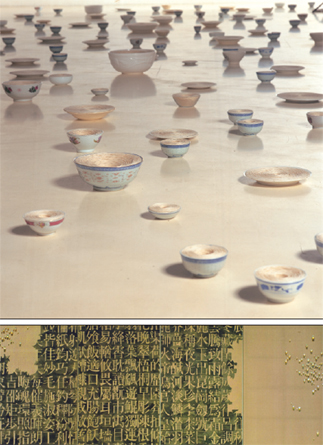 If you can’t afford to go to Paris, take heart, because Paris is coming to you.

The French capital is the inspiration for the second installment of the “Contemporary Korean Artists” series currently on at the Seoul Arts Center.

“The Paris exhibition presents works from the first-generation Korean students who have been based in Paris for the past 40 to 50 years up to the postmodernism-influenced young artists,” said Kim Mi-jin, art director of the exhibition.

Many artists and students go abroad in search of their creative side every year. The Seoul Arts Center decided to organize this series of exhibitions to highlight the progress of contemporary Korean artists and their works.

The center says that the main reason behind the exhibitions is to introduce to domestic audiences the role Korean artists are playing on the global stage.

More specifically, the series looks at the types of artworks Korean artists abroad are producing and how they are being influenced by their new surroundings.

The first Korean artist left for Paris in 1925, and numbers started to grow in the 1950s as more students wanted to study there.

Although local artists have tended to gravitate toward New York, Germany and England in recent years, there are more than 1,000 Korean artists registered with the Korean Embassy in Paris, according to the Seoul Arts Center.

Kim hopes that the exhibition will showcase the unique styles of contemporary art from Paris.

The exhibition, with 21 participating artists, is divided into three sections organized in chronological order.

“The first section deals with artists who set out to discover the roots of Western contemporary arts during the 1950s and 1960s,” Kim explained.

The second section comprises works from artists “who insist on the essence or true nature of art and who deal with problems pertaining to the abstract and reproduction.”

The Seoul Arts Center further explained that contemporary artists such as Lee Sung-ja, Kim Chang-yeol and Bang Hye-ja went to Paris in the 1950s and were influenced by the L’Art Informel movement.

The post-World War II movement is a style similar to abstract expressionism, which features unprompted brushwork and blobs of paint.